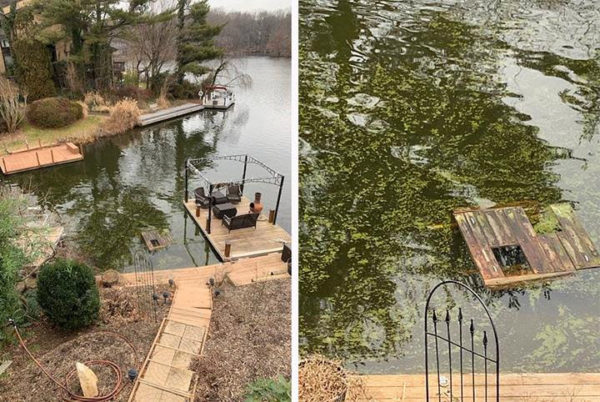 A rare winter algae bloom that has both toxic and non-toxic forms has formed over Lake Thoreau.

Reston Association is advising caution after the bloom — known as Aphanizomenon flos-aquae – took over parts of the lake. The bloom is toxic if humans ingest it but dogs can become ill after ingesting or coming in contact with the algae.

The association has no immediate plans to treat the lake until water temperatures are in the upper 50s.

In the latest budget cycle, RA’s Board of Directors significantly increased its funding allotment by 86 percent for lake management and water treatment after major blooms — caused partially by ineffective or delayed water treatment — consumed Lake Thoreau over the summer.

Monthly treatment is expected to begin in the spring as part of RA’s new lake management strategy.

But winter blooms are more uncommon in Reston.

In a statement released today, RA noted that Reston typically does not have algae blooms in the winter because of colder temperatures. Water temperatures have hovered in the upper 30s and lakes have not completely frozen this season.

RA’s spokesman Mike Leone said that the organization has not yet determined the toxicity of the current bloom. He noted that certain species of cyanobacteria are referred to as toxic because they can harm people, pets and wildlife.

‘The current algae bloom has the potential to be toxic but it does not mean that it is toxic all the time. Given the potential though, RA encourages individuals and their pets to avoid contact with water where they see visible algae just to be safe,’ he wrote in a statement to Reston Now.

RA staff found that areas where the algae bloom was before have already been reduced.