The board intended to formally vote on the latest proposal from FCPS Superintendent Scott Brabrand during its regular meeting on Thursday (Feb. 4), but enough members stated that they would support the plan during the board’s work session on Tuesday that they ultimately decided to not wait to give their consensus.

“While there’s no guarantee for anything in life regarding a pandemic, I think this is a strong plan with the resources we have to return to some semblance of what school was like before COVID,” Melanie Meren, who represents Hunter Mill District on the school board, said. “Of course, a lot will be different, but I think it’s needed to help people recover their learning loss.”

As with previous Return to School plans, families have a choice between all-virtual learning and a hybrid model with two days of in-person learning and two days of distance learning. All students have been learning virtually since FCPS returned from winter break.

Under the new timeline, students who opt to get some in-person learning will return to school buildings in phases, starting on Feb. 16 with about 8,000 special education and career and technical education students and concluding with third through sixth-grade students on Mar. 16. 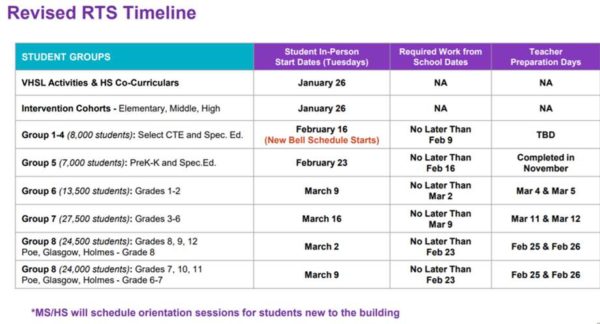 This schedule deviates from the one that was implemented in the fall before being suspended in having elementary school students restart in-person learning at the same time or even later than their older peers in middle and high school, whose return will be staggered across Mar. 2 and 9.

As of Feb. 1, FCPS has filled 74% of the 846 classroom monitor positions that it says are needed to restart in-person learning, but that still leaves 205 vacancies. The biggest gap is in grades three through six, where 94 positions – or 46% — remain vacant.

FCPS Deputy Superintendent Frances Ivey told the school board that, while some may prefer a more aggressive timeline, discussions with elementary school principals indicate that most of them support Brabrand’s proposal.

“There’s an overall positive consensus to the timeline, and recommendations were made based on that feedback,” Ivey said.

Brabrand acknowledged that not all teachers and staff will be fully vaccinated by the time in-person learning restarts, but more than 7,000 FCPS employees had received their first dose by Jan. 25, and nearly 90% of staff members had scheduled an appointment with Inova by Jan. 27.

Inova stopped scheduling first-dose appointments on Jan. 25 due to an anticipated drop in supply levels, but FCPS rescheduled approximately 5,000 appointments that had been canceled over the past weekend, and Brabrand says he is “really confident” that the remainder will be taken care of in the next week or two.

“There really isn’t a perfect Return to School timeline. We’re trying to balance so many competing factors, and that’s what’s been hard,” Brabrand said. “…I am proud of what Inova and the county health department did. They brought us in with open arms and worked through the glitches.”

Even with vaccinations, implementing mitigation protocols like face masks, social distancing, and good hygiene and cleaning practices will be “paramount” to enabling safe in-person learning, according to Brabrand’s presentation.

Individual schools or classes could revert to virtual learning based on COVID-19 transmission levels and staff capacity within those schools, as well as community spread as indicated by the 14-day case rate per 100,000 people and 14-day testing positivity rates. 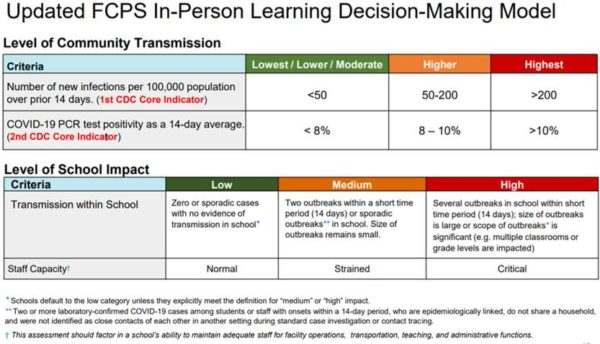 The inability to create six feet of distance between students on buses will be a challenge, but FCPS officials say they are working with transportation staff to address those concerns, and adequate personal protective equipment will be available for all workers.

“We have certainly enough PPE on hand, and the quality for which we’re purchasing is based on health department guidelines,” FCPS Chief Operating Officer Marty Smith said. “…We certainly wouldn’t want to undercut the safety of our staff or students.”

Now that the school board has settled on a Return to School plan, Brabrand said he is committed to ensuring teachers, staff, administrators, and students get what they need to safely and successfully transition back to in-person learning.

“We’ve got to stay on the data,” Springfield District Representative Laura Jane Cohen said. “We’ve got to be as transparent as humanly possible and a lot more transparent than we have been able to be up to this point. Our staff and families deserve to know what they’re walking into.”