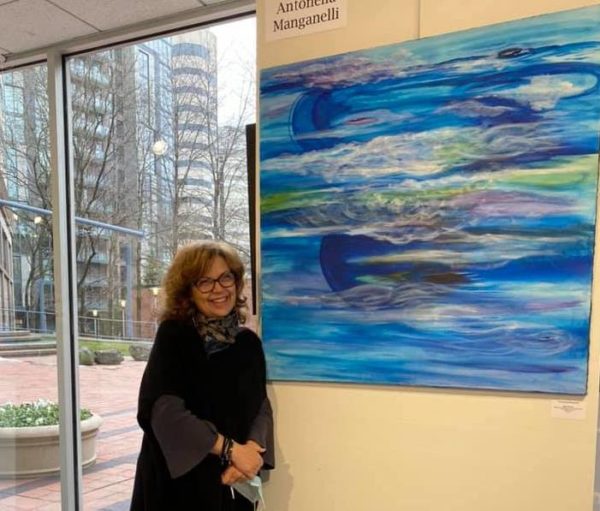 A new international art show at Gallery B in Bethesda features work from eight Reston artists.

Organized by local creative co-op Art4Us, the show is entitled “CounterCurrent” and features paintings, sculptures, drawings, photography, and literature from about 30 artists across the globe – a number of which call Reston home.

Antonella Manganelli is the co-curator of the show (along with Grazia Montalto) and she describes the show as “as everything that goes against the current.”

“It’s about challenging yourself, trying a different technique,” she says. “Unfollow the rules, whatever was taught to you. Don’t be afraid to be unconventional.”

She’s also an artist herself and heavily involved in Reston’s art community. Manganelli is a long-time board member at the League of Reston Artists.

Due to her local roots running deep (though, she’s originally from Italy) is why many Reston-based artists sent in submissions to the open call.

Artists also from France, Canada, and Brazil also provided work for the show.

CounterCurrent is also being juried, with awards being given for visual arts and literature excellence.

The literature awards are being judged by Mike Maggio, former Northern Regional Vice-President of the Poetry Society of Virginia.

Manganelli’s work is also in the show and she says that she took it as a challenge to try unfamiliar techniques.

“I’m a surrealist and like to create different meanings in my paintings,” she says.

CounterCurrent was also reviewed earlier this month in the Washington Post, which called the show “as sprawling and diverse a show as the compact Gallery B can contain.”

The show opened on February 4 and closes on the 28th of this month.

Gallery B at 7700 Wisconsin Ave E in Bethesda is open for in-person visits from Wednesday through Saturday 12 p.m. to 4 p.m.

Masks must be worn and the space is limited to ten people at a time.

Manganelli says the idea is for artists to not hold anything back with their work in the show.