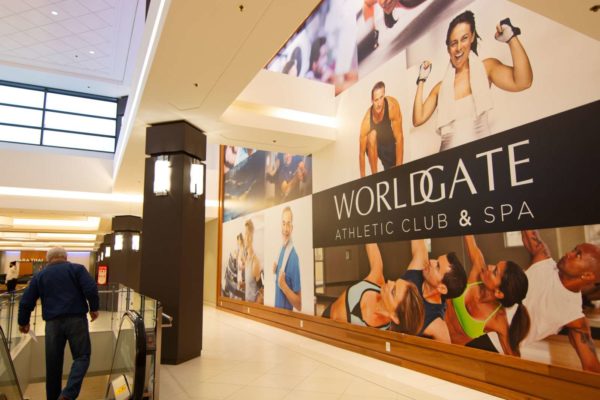 The news come after a note sent by the former management that the facility was “being forced to permanently close its doors” immediately caused some confusion among members.

On Monday (Feb. 15) afternoon, a note from the “Sport & Health Management Team” was sent to members saying that “unbeknownst” to them the landlord has “decided to terminate its lease with the club owner and take possession of the space.”

Due to this, the club was closing that day.

“We are equally shocked by what has transpired,” the note continues which was subsequently posted on their website.

However, RAPPAPORT – which owns the Worldgate shopping center – confirms to Reston Now that isn’t exactly the case.

In a press release provided Tuesday night, Worldgate’s landlord announced that WTS International has taken over as the management company of its “state-of-the-art fitness facility at Worldgate Centre in Herndon, VA.”

“We’re excited to have WTS International oversee the management and operations for Worldgate Athletic Club & Spa,” Gary D. Rappaport, CEO, wrote in the release. “WTS International is known for its expertise in fitness management and award-winning spas, and we are confident in their plans to elevate the Worldgate Athletic Club & Spa as a luxury brand and create incredible value for members within the communities that we serve.”

In a follow-up email, a RAPPAPORT spokesperson says that the confusion came down to the previous management not being aware of the tenant’s and landlord’s contractual decision making.

In 2014, McLean-based US Fitness bought Sport & Health. One of the clubs Sport & Health was managing at the time was the fitness facility at Worldgate.

The spokesperson also says that due to a contractual relationship between US Fitness and the tenant, Rappaport was unable to continue using Sport & Health as the management company.

It has nothing to do with the performance of the management company, the spokesperson reiterated. The club remains financially successful and one of the biggest fitness facilities in the area, they noted.

There was no delay in transition. On Sunday night, the facility closed for the day under Sport & Health management and reopened normal time on Monday under WTS International management.

As of the moment, the facilities and amenities remain the same as they were under Sport & Health.

Reston Now has reached out to Sport & Health to ask about the confusion, but has yet to hear back as publication.

What this means for members is that they have a choice.

According to Sport & Health’s note to members, all memberships for the Worldgate location are being upgraded to allow access to all 27 area locations which are owned by the same company. This includes ALL Onelife Fitness, Sport & Health and Crunch Fitness. Half of February’s dues are also being refunded to members.

For those who would like to stay at the Worldgate facility, WTS says they will “honor all current membership rates from the previous management for those who sign up.”

They are also recruiting trainers, instructors, therapists, and other staff and are hosting a job fair today (Wed, Feb. 17) 12 p.m. to 6 p.m.

The Worldgate fitness facility first opened more than 30 years ago, in 1988, making it one of the oldest in the area.

Gyms and fitness facilities are allowed to be open with limited capacity under Virginia COVID guidelines. Employees and patrons at gyms are required to wear masks, but not while exercising.

Full release from Rappaport and WTS International is below:

Rappaport is pleased to announce that WTS International is the management company for its state-of-the-art fitness facility at Worldgate Centre in Herndon, VA. Headquartered in Rockville, MD, WTS International is the world’s leading spa, wellness, and lifestyle consultancy and management firm. Under WTS, there will be new offerings and enhancements for one of the largest and most successful clubs in the D.C. metro area, Worldgate Athletic Club & Spa.

“We’re excited to have WTS International oversee the management and operations for Worldgate Athletic Club & Spa,” says Gary D. Rappaport, CEO of Rappaport. “WTS International is known for its expertise in fitness management and award-winning spas, and we are confident in their plans to elevate the Worldgate Athletic Club & Spa as a luxury brand and create incredible value for members within the communities that we serve.”

WTS International will bring its 47+ years of extensive fitness industry experience to the property which, is already an amenity-rich health club. WTS International has provided consulting and management services for over 300 spas, fitness/wellness centers, leisure and lifestyle facilities worldwide including Four Seasons, Westin, and InterContinental. Their clients include some of the most luxurious fitness and wellness brands such as VERDURE in Amarillo, Texas, Brooklyn Sports Club in Brooklyn, New York, and Manhattan Plaza Health Club in New York, New York.

Customers can rest assured that Worldgate Athletic Club & Spa will honor all current membership rates from the previous management for those who sign up. All operating hours (including spa, fitness and aquatics) will remain the same. Furthermore, partnerships with Blue Chip Sports Management and Personal20 will also continue as before. WTS International is actively recruiting the best trainers, instructors, therapists, and operations staff in the area and is hosting a job fair at the club Tuesday, February 16th and Wednesday, February 17th, noon to 6pm.For career opportunities, visit. www.wtsinternational.com.

Worldgate Athletic Club & Spa membership benefits include access to virtual programming, training, and nutritional consultation, as well as 15% off all spa services. All new members can join for $29 with no dues until March 1st, one complimentary fitness consultation, and one personal training session. To join, visit www.worldgateathleticclubandspa.com/join.