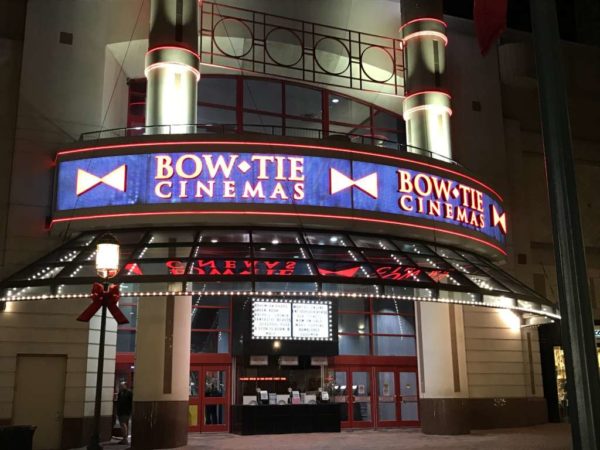 A company spokesperson tells Reston Now that they plan is to turn the projectors back on when “the film supply becomes more stable, perhaps by Memorial Day at the latest.” Meaning, when studios begin releasing more movies again to theaters (as opposed to streaming services or on demand).

The spokesperson noted that studios have already started doing this, advertising summer releases and populating the calendar for the later year, due to the re-opening of theaters in New York and Los Angeles.

The Reston Town Center movie theater shut down a year ago and has yet to reopen.

However, several other local theaters have already opened their doors including Herndon’s AMC Worldgate 9 and AMC Tysons Corner 16. The Regal Dulles Town Center, however, remains closed.

Virginia currently allows movie theaters and other arts venues to open with up to 30% capacity.

Bowtie Cinema’s only other Virginia location in Richmond reopened in July. The company spokesperson didn’t answer a follow-up about why the Richmond location is open while the Reston one is currently not.

When it does re-open, a number of safety protocols will be in place including mandatory facemasks, increased cleanings, social distancing, and contactless cash exchange.

Bowtie Cinemas acquired the theater at Reston Town Center in 2011 from Rave Cinema.