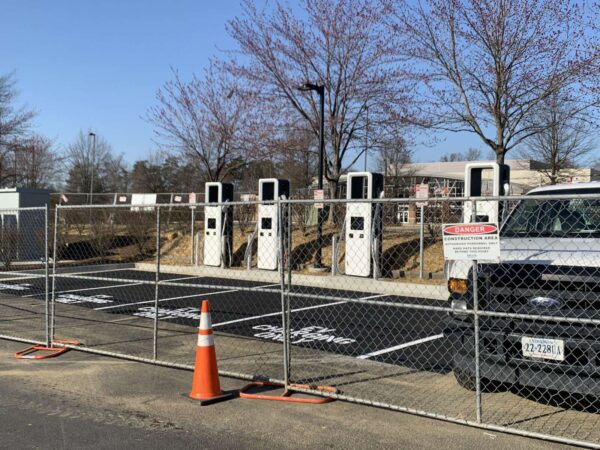 New electric vehicle charging stations are coming to Target in Reston this summer.

While the stations have been installed, they won’t go live until the summer. Four 150 kilowatt-hour chargers are planned at Target, which is located at 12197 Sunset Hills Road.

The stations are powered by Electrify America, a Reston-based company that promotes zero-emission vehicle adoption through an a fast and convenient charging network across the country.

The company, which was founded in 2016, currently does not have plans for additional stations in Reston and Herndon, a company spokesperson told Reston Now. But other locations are planned in Northern Virginia.

Roughly 800 total stations with about 3,500 chargers that are specifically designed for quick charging are planned by the end of this year.

The expansion at Target is part of a nationwide push to expand electric vehicle charging option. In 2018, Target announced that it plans to add the stations to 600 parking spaces at more than 100 sites across more than 20 states.

“Accelerating our efforts to install new charging stations at Target stores across the country is one way we’re building on our commitment to investing in solutions that leave our communities better for future families,” said John Leisen, vice president of property management at Target.