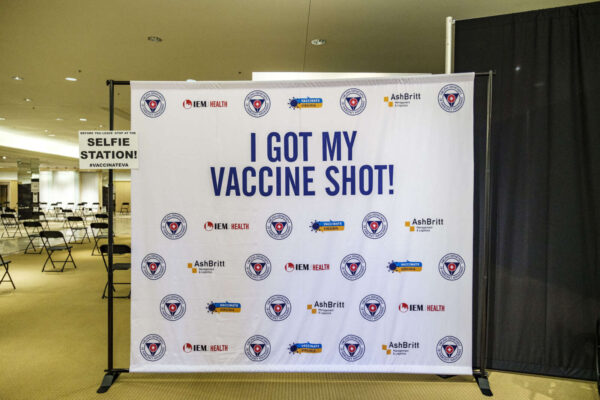 Fairfax County now has enough supply to vaccinate whoever wants to be vaccinated, the county health department announced yesterday (April 28).

This comes only a week after the county said there wasn’t enough vaccine to meet the new demand from eligibility expanding into with the move to Phase 2. Several days after that, vaccine appointments on Vaccine Finder still remained hard to come by due to the short supply.

But that has now changed, thanks to an increase in supplies at the state and federal levels, Fairfax County Board of Supervisors Chairman Jeff McKay told Reston Now.

Plus, he says, there are now more providers giving vaccines including grocery stores and pharmacies as well as private practices.

A look at Vaccine Finder reveals that grocery stores and pharmacies across the region have more open appointments than they did last week. The Target on Sunset Hills Road in Reston and CVS on Lee Highway in Fairfax, for example, have openings as soon as tomorrow (April 30).

Last week, Fairfax County retail pharmacies received 42,070 vaccine doses as part of the Federal Retail Pharmacy Partnership. The county was allocated 30,552 doses from the partnership this week, according to the Virginia Department of Health.

“However, since pharmacies shift inventory among themselves, the actual number could be different,” the VDH spokesperson told Reston Now.

There’s also a state-run mass vaccination clinic in the county, which opened last week at the former Lord & Taylor in Tysons Corner Center and is now offering walk-in appointments.

“The Tysons Community Vaccination Center has a very large capacity — 3,000 people per day,” McKay said. “Paired with other sites throughout the county, it has certainly increased the capacity to vaccinate more people.”

As of yesterday afternoon (Wednesday), the clinic had administered 11,761 vaccinations since it opened eight days ago. That number was expected to top 12,000 by the end of the day, McKay said.

When visiting the facility around 4 p.m. yesterday, First Lady Pamela Northam noted that about half of Virginians have now received at least one vaccine dose. More than 6 million doses have now been delivered in the state, and close to 30% of residents are fully vaccinated.

The Fairfax County Health Department also continues to operate vaccine clinics at the Fairfax County Government Center and George Mason University. Appointments for those sites can be booked through the Centers for Disease Control and Prevention’s Vaccine Administration Management System (VAMS).

With supply and appointments becoming more available, including a potential resumption of the use of the Johnson & Johnson vaccine after the pause was lifted last Friday, it’s possible that the county could meet the May 31 deadline set last month by both state and federal officials of delivering at least one dose of the vaccine to everyone who wants one.

However, McKay again didn’t fully commit to that target date.

“It is certainly our goal to vaccinate as many people as possible as quickly as possible,” he told Reston Now.

In some places across the country, vaccine supply is so far exceeding demand that mass vaccination sites are closing and localities are actually declining more vaccines.

According to McKay, that is not the case in Fairfax County, but supply has at last met demand.

“For many months, our demand was greater than supply,” he said. “Supply is now available at the level required to vaccinate anyone 16+ in Fairfax. That said, now is the time to get vaccinated.”