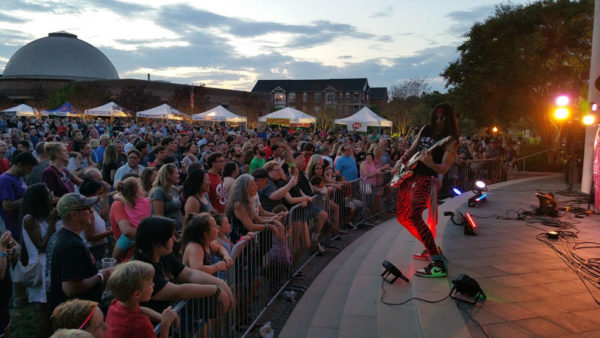 The Herndon Town Council voted on Tuesday (April 27) to approve a budget for fiscal year 2022 that includes an additional $20,000 to support the Dulles Regional Chamber of Commerce’s popular free summer concert series, which is now tentatively aiming for a delayed start date of July 2.

“This is one of the things I think we need to build and grow upon,” Councilmember Cesar del Aguila said. “[Friday Night Live’s] got a lot of good things around it. It’s a good foundation to build an even better atmosphere for including more people.”

The vote came after a public hearing with several earnest speeches by supporters of the annual event, from longtime attendees and volunteers to an Ashburn resident whose band has performed on the Town Green as part of the series.

Speakers praised Friday Night Live as an attraction that draws both town residents and outside visitors to downtown Herndon, giving local businesses and restaurants a boost that could be especially critical now after a year of upheaval caused by the COVID-19 pandemic.

“It’s an advertisement for the Town of Herndon that costs much less than the revenue it brings in,” Herndon resident Mindy Thunman said. “Dollars aren’t the only way to measure the value of Friday Night Live. There are so many other intangible ways, the most important one being the sense of community it brings, and you simply can’t put a dollar figure on that.”

After pivoting to an online-only format last year, Friday Night Live organizers hope to bring the event back in person this summer, but their ability to stage the concerts hinges on the Town of Herndon funding support services like police security and public works staff and equipment.

The possibility that Friday Night Live would be unable to go on inspired “an outpouring” of support for the event from citizens, Herndon Town Manager Bill Ashton told the town council on Monday.

According to FNL founder Doug Downer, who spoke at the public hearing, more than 90 letters of support were sent to the town council as part of the community input process for the FY 2022 budget. Councilmember Signe Friedrichs said that they received more comments on the concert series than any other issue she has voted on since joining the council in 2017.

Ashton said that he had approached FNL funding in his proposed FY 2022 budget with the expectation that the town would get federal stimulus funds from the American Rescue Plan Act in May, but it turned out that the money needs to be appropriated by the state and won’t be available until July.

Because the budget was already advertised at $55.7 million, Ashton proposed offsetting the $20,000 increase in expenditures for FNL by decreasing appropriations for a retiree health benefit program that the town ceased using for police employees in 2017 and is in the process of phasing out for all other government workers.

“What we did is we took the money from there to move to Friday Night Live,” Ashton said. “We’re going to monitor the retiree system moving into next fiscal year. Again, if we need to add additional money in there, I can under my authority maneuver up to $100,000 from one account to another.”

The town council approved the Alternate B fiscal planning resolution to adopt the FY 2022 budget by a 6-0 vote with Councilmember Naila Alam absent for the motion.

The FNL funding was the only alteration from the advertised budget, which reduces spending by 8.7% from the adopted FY 2021 budget while supporting 3% pay-for-performance raises for town employees and some capital improvements.

Other notable components of the newly adopted budget include a hiring freeze for some positions, funds to resume training that had been suspended at the start of the pandemic, and a conversion of two paid holidays per year into personal holidays that town employees can use at their discretion.

“The employee would have that holiday in their pocket to use at their discretion,” Ashton said. “So, if they have a different faith tradition that they want to recognize, that is their business and they can use that holiday for that reason. If they want to take their birthday off or they just want to celebrate something that is very important to them, they may do that.”

In addition to adopting a budget for the next fiscal year, which begins on July 1, the town council voted unanimously to maintain flat tax rates across the board, which keeps the real estate tax rate at 26.5 cents per $100 of assessed value.

Water and sewer rates, however, will go up 1% starting on July 1.

More Stories
Morning Notes‘There is enough vaccine for everyone who wants to be vaccinated,’ Fairfax County says