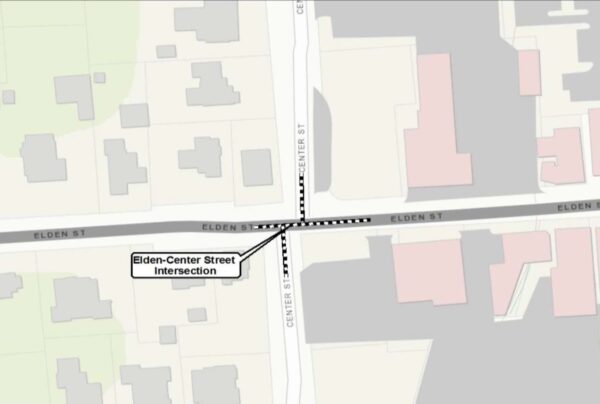 Another capital improvement project is moving closer to completion in the Town of Herndon.

The Herndon Town Council unanimously voted in favor of awarding a contract to Fort Myer Construction Corporation for improvements at the Elden and Center streets intersection during its public session on May 11.

Fort Myer submitted a bid of $863,000, the lowest of five bids that the town received for the project.

According to the project description, the lane and signal changes will be installed in conjunction with improvements to the existing storm drain system and enhancements to pedestrian facilities located at the intersection, including the addition of brick sidewalks.

The project description states that these enhancements “will assist with the existing and future mixed-use residential development on Center Street which places greater traffic volumes in this project area.”

The project is expected to be completed by 2023.

Up to 50% of the construction contract will be covered by reimbursement funds through a revenue-sharing agreement between Herndon and the Virginia Department of Transportation.

Irish told the council during a work session on May 4 that the cost fell below the $930,000 that had been budgeted for the project.

He added that the plan to make up the half of the costs not supported by revenue-sharing funds is to use local funds collected from the Northern Virginia Transportation Authority. The NVTA funds come from the 30% local distribution revenue given to localities for transportation projects through House Bill 2313, which was passed in 2013.

The Elden-Center Street project is one of 48 capital projects included in Herndon’s FY 2021 – FY 2026 Capital Improvement Program that was adopted June 9, 2020. Irish says this is the first of several capital improvement projects that will be brought before the town council in the next few months.