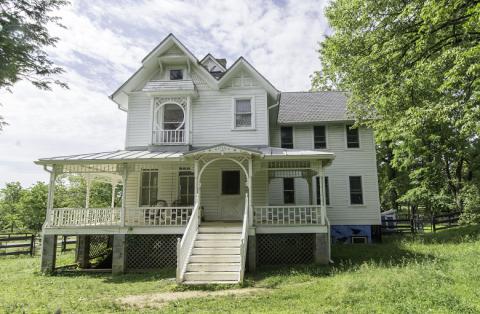 (Updated at 4:45 p.m.) Efforts to rehabilitate the Turner Farmhouse in Great Falls have been underway for a few years now, and community members will get a chance to glimpse the progress that has been made later this week.

The Fairfax County Park Authority will host a watch party at 11:30 a.m. on Thursday (May 27) for the premiere of a virtual open house to showcase the 116-year-old property, which is located at 10609 Georgetown Pike in the 52-acre Turner Farm community park.

Built in 1905 as part of the Turner family’s dairy farm, the Turner Farmhouse is now part of the park authority’s Resident Curator Program that enables individuals and nonprofit or for-profit organizations to lease historic properties in Fairfax County rent-free in exchange for a commitment to rehabilitating the property.

Preceded by the Stempson House in Lorton, the Turner Farmhouse was the second property added to the program after it was established by the Fairfax County Board of Supervisors in 2014. Other sites include Herndon’s Ellmore Farmhouse, which will be restored by the disability support services nonprofit ServiceSource.

The nonprofit Turner Farmhouse Foundation led by equestrian Sarah Kirk has been the resident curator since Nov. 1, 2018. Turner Farm primarily hosts equestrian facilities for horse riding, but it also has a picnic pavilion, a playground, and an observatory park, though the latter has been closed to the public during the COVID-19 pandemic.

The pandemic also prompted the park authority to go virtual for the upcoming Turner Farmhouse open house, which will be streamed on the FCPA YouTube page. The agency held similar premiere watch parties for the Stempson House on May 1 and the Hannah P. Clark House in Lorton on May 15.

According to the FCPA news release, open houses are held annually for each of the Resident Curator properties under rehabilitation to fulfill the program’s requirement that “reasonable public access” be provided for the sites.

The park authority says the 3,216-square-foot, four-bedroom Turner Farmhouse “is significant due to its Queen Anne style architecture and because it exemplifies the cultural, economic, and historic heritage of the Springvale and Forestville/Great Falls communities in Northern Virginia.”

The original dairy farm exemplified the kind of farm that was prevalent in the Great Falls area during the early 20th century, according to the county.

“Two and a half years into a twenty-year lease, Ms. Kirk has made substantial improvements to the Queen Anne style farmhouse and the milk house outbuilding on the property,” Langton said by email. “Exterior and interior improvements continue at the farmhouse, with repairs to be made on the garage structure and historic crib barn remaining as well.”