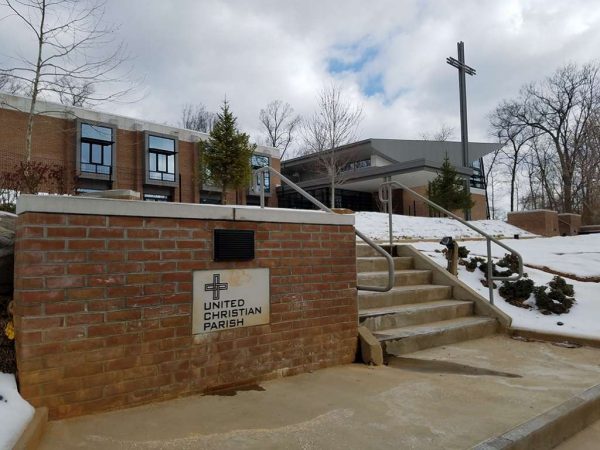 The United Christian Parish will host an Inova blood drive on July 30 in an effort organized by church members to support one of their own.

The Inova Bloodmobile will be in the Reston church’s parking lot at 11508 North Shore Drive from 1:30 to 6 p.m. that day, organzier Marilyn Silvey tells Reston Now.

A former 40-year resident of Reston, Silvey now lives in a retirement community in Ashburn, but she remains a member of the United Christian Parish.

She started organizing the blood drive as a show of support for fellow parish member Mary Anne, whose last name she declined to share to protect her friend’s privacy.

According to Silvey, Mary Anne has a blood disease that requires her to receive regular transfusions. Typically, she gets a transfusion every two weeks, but her appointments have recently been cut back to once every three weeks due to a nationwide blood shortage, leaving her weak to the point where she had to start using a wheelchair.

“There is always a shortage in summer, as people focus on vacations instead of on saving lives, but this year it is worse because of the lack of usual donors during the covid pandemic,” Silvey said by email. “So we are holding this for all the Mary Annes in this area who need blood to stay alive.”

An “atypically high” number of emergency room visits and trauma cases have depleted the nation’s blood inventory, the American Red Cross said on World Blood Donor Day (June 14), reporting that hospitals with trauma centers have seen a 10% increase in demand this year compared to 2019.

The Red Cross says these cases often require a significant amount of blood for doctors to have a chance to save the patient’s life. The increased demand also comes from an influx of patients who had delayed receiving care earlier in the COVID-19 pandemic.

As of late April, Inova’s red blood cell inventory was in the red for all types of blood. Its supply of O positive blood was especially depleted, as the health care system had only 30 units available out of a desired 300 units.

Silvey says the United Christian Parish’s goal for the upcoming blood drive is to get 100 potential donors. Masks and photo identification will be required for donors, who should allow up to an hour to go through the process, Silvey says.

Silvey says questions can be directed to coordinator Deborah Aschenbach at 703-585-8216.

Irving Middle School students wear face masks in class (via FCPS) Updated at 11:50 a.m. — The Fairfax County Board of Supervisors voted 8-1 this morning to support the continued mask…