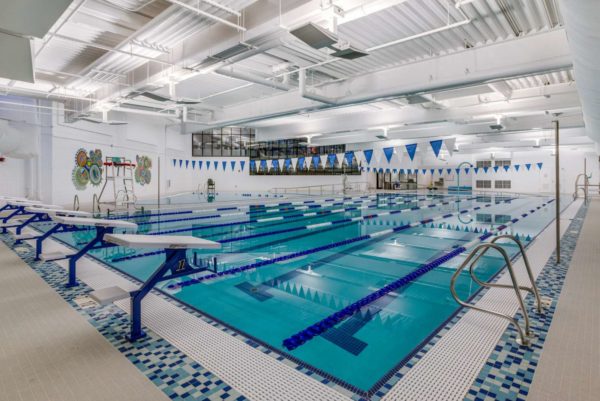 A $5.5 million project to replace an aging pool at the Reston Community Center has earned another award for its environmental stewardship.

The Fairfax County Environmental Quality Advisory Council, an advisory group appointed by the Board of Supervisors, has recognized the Reston Community Center with its 2021 Environmental Excellence Awards. The awards recognize people, organizations and businesses who advance or support the county’s environmental efforts, go above and beyond their typical civic responsibilities and demonstrate leadership in the community.

The project involved the Terry L. Smith Aquatics Center. RCC previously noted the renovation “replaced a 40-year-old pool and its aging infrastructure with two new, state-of-the-art pools: a 25-yard lap pool and a warm water exercise pool.” It opened in January 2020 after a year of construction.

“This year’s awardees have done far more than just demonstrate their passion for environmental issues. They have changed the face of our community by giving their time, energy, and expertise during an exceptionally challenging year,” Stella Koch, chair of the Fairfax County Environmental Quality Advisory Council, said in a statement.

The awards, announced Nov. 9, noted the following for the pool project:

In 2020, the Reston Community Center (RCC) unveiled a completely renovated aquatics center, replacing the aging infrastructure of the original pool with two new pools and other physical improvements. This $5.5 million project incorporated a number of environmentally friendly features, consistent with RCC’s commitment to environmental stewardship. More than 177 tons of construction materials were recycled over the course of the project, natatorium-rated LED light fixtures were installed, and the HVAC and pool systems were replaced with more efficient equipment.

Details on their environmental leadership as well as records of previous winners from earlier years are available online.

Last month, the nonprofit Virginia Recreation and Park Society recognized the RCC renovation in its bricks and mortar awards category during an annual awards ceremony.