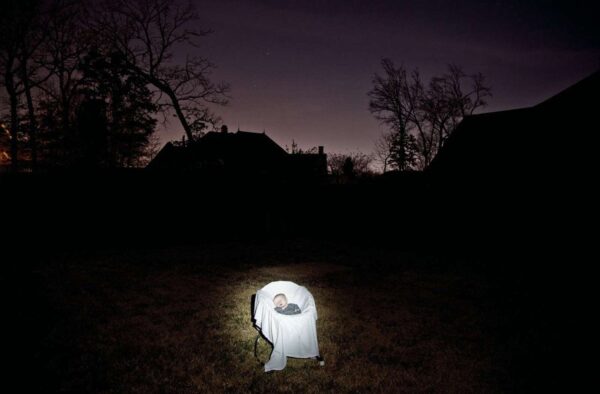 The Tephra Institute of Contemporary Art will kick off the new year with the work of Laurel Nakadate, a Boston-based artist who traveled across the country to photograph familiar matches she discovered through DNA testing.

Nakadate’s work, which is presented in partnership with George Mason University, will be on display at the institute from Jan. 22 through May 29. The artist focuses self-representation, identify formation, representation and loneliness.

Her DNA-based series — “Relations” — began in 2013. It also features direct relatives of her mother — who died shortly after Nakadate completed work on that series. Each photograph features individuals at night with a single light source at a location of their choice.

The arts institute offered a quick look at upcoming exhibitions as well:

Travis Childers (Feb. 10-June 28): “The component parts of one of Childers’ artworks are often recognizable manufactured objects, such as pencils or model railroad trees and figurines–even his works on canvas are comprised of images lifted from printed newspaper using scotch tape. Through a process that errs on the side of obsession, he assembles works that are deeply influenced by his personal experience of the Northern Virginia suburban landscape and his memories of a more rural childhood. In reference to a collage made from hundreds of skies excerpted from the background of published newspaper images, the artist reflects, “There is just something reassuring about seeing so many horizon lines.”

Danni O’Brien (July 14-Oct. 11): Danni O’Brien is fascinated by the history of the plastics boom that took place in the mid-twentieth century. Looming in the corner of her studio, an overburdened wire shelf serves as a library of collected refuse. Boxes and bins of found and scrapped objects are sorted intuitively by criteria such as texture, shape, material, and color. O’Brien speaks about her process as “caring for the objects” as she meticulously integrates them into monochromatic wall mounted works, whose compositions are drawn from diagrams similarly loosened from their original contexts as instructions for home renovations, sewing, or understanding human anatomy.

Dominic Chambers (Fall 2022): Chambers’ most recent bodies of work feature his friends and acquaintances engaged in acts of leisure and contemplation. “Too often, the Black body has been located in our imaginations as one incapable of rest,” Chambers explains. “Often when we imagine what the Black body is doing it is usually an act of labor, rebellion, or resistance.” Instead, his subjects are depicted reading or lost in thought, their gaze fixed on points that seem far beyond the realm of the picture plane.