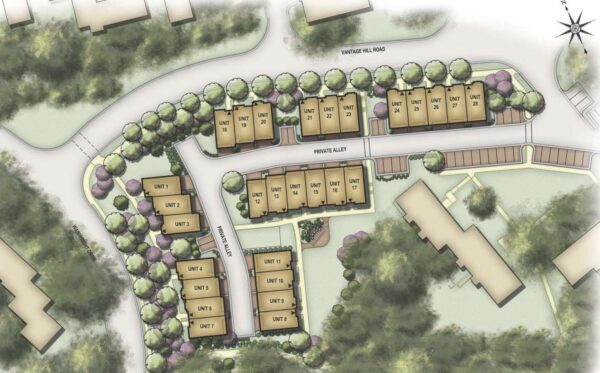 After years of discussions, a formal plan to redevelop part of Vantage Hill Condominiums — an aging development built in the late 1960s — has been filed with the county.

CM Vantage LLC — a McLean-based developer – plans to build 28 townhouses on the southwestern portion of the property, which currently houses an abandoned swimming pool, parking, and a common area.

Discussions on the proposal have been underway for years.

The condominium association, which manages the 152-unit development, plans to use the money after selling the abandoned portion of the property to address a backlog of improvements. The building was developed as an apartment complex in 1967 and was redeveloped into a condominium building in 1984.

Stakeholders have gone back and forth on this project for years. Designs were tweaked in 2020 to include fewer townhouses and more trees. Craftmark Homes, a homebuilding company in Virginia, had originally planned 31 townhouses that were closer to the main road.

Rear-loaded garages from internal lanes are planned. Trees will be preserved to the south and east of the proposed townhouses and the residential units will face an open gathering space.

The developer plans a “small-scale infill development that is in harmony with the character of surrounding development,” according to a Jan. 26 application.

The county’s Affordable Dwelling Unit ordinance does not apply to the proposed development because it is less than 50 dwelling units.

The condominium building is one of Reston’s first developments. Maintenance issues have gone unaddressed for years, according to some condo association members.

So far, the application has been submitted and will be formally accepted by the county. Dates for formal review by the county’s planning bodies have not yet been scheduled.