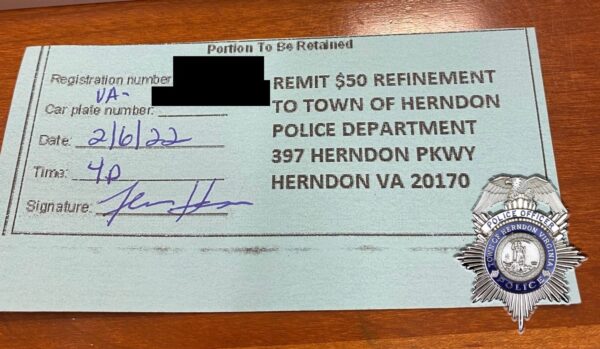 The Herndon Police Department is warning residents of a parking ticket scam, which comes after the town passed sweeping parking restrictions.

The fake ticket, which is blue, urges residents to pay $50.

A spokesperson for the Herndon Police Department told Reston Now that it is unclear how widespread the issue is at this point.

“Until we can determine who created the fake ticket and placed it on the vehicle, the only thing we can do is education the public on the fact that this is a scam,” said Lisa Herndon, a spokeswoman for HPD.

So far, only on citizen sent in a check for payment after receiving  the fake ticket on their vehicle.

Residents who receive the parking ticket should report it to HPD by calling 703-435-6846.

In late January, the town’s council restricted how close drivers can park to drivers and doubled down on parking of commercial vehicles in neighborhoods.

The "parking ticket" shown was found on a vehicle parked on Locust Street. This IS NOT a legitimate parking ticket from HPD or the @TownOfHerndon. If you receive one on your vehicle, please report it to us by calling 703-435-6846. #HerndonPD pic.twitter.com/s63SzCBGSV