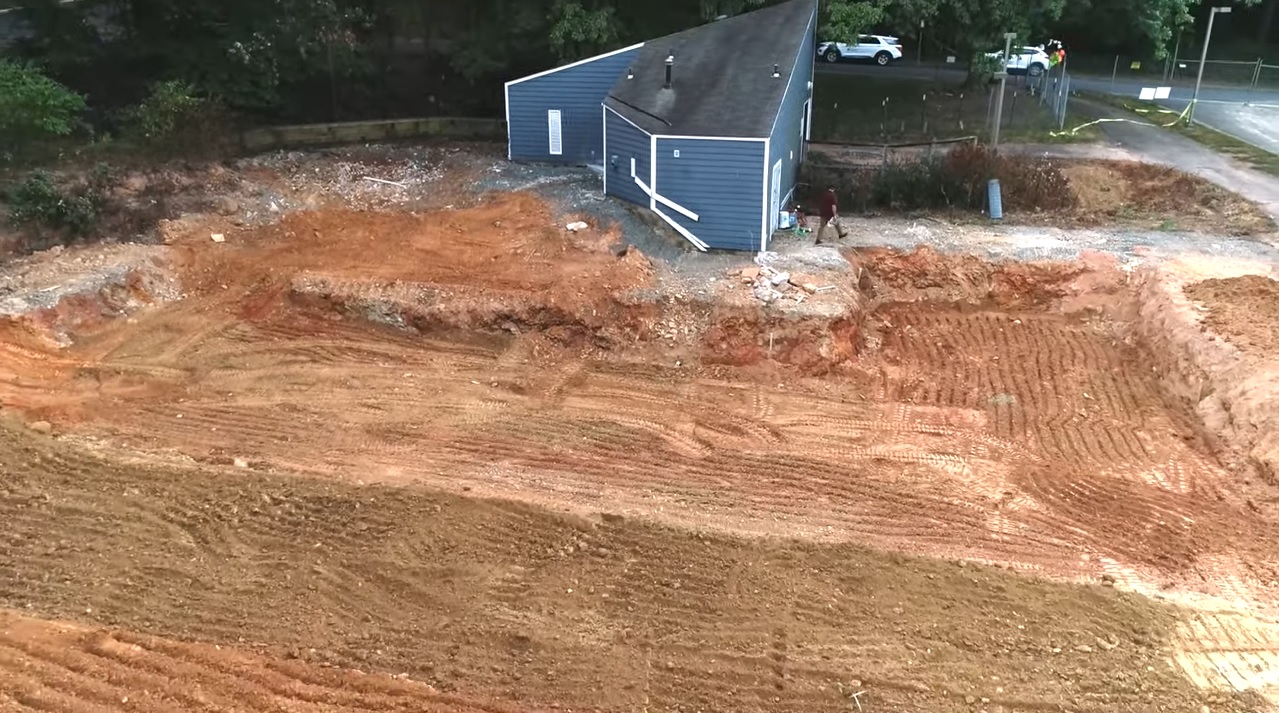 The Lake Thoreau pool in Reston has been reduced to a dirt ditch at the corner of Sunrise Valley and Upper Lake drives, paving the way for a full renovation of the facility.

On-site work at 2040 Upper Lake Drive began over the summer. The pool has now been completely demolished, including the pool shell and concrete deck, according to the latest update from Reston Association.

“The spa is completely gone from here, and the wading pool is gone from up top. All that material has been brought off site, and now, we’re on the recreating process,” RA Capital Projects Manager Austin Mayhugh said in the video posted last Friday (Sept. 30).

Now, the crew from contractor Hubert Construction is preparing to install caissons to serve as the foundation for the pool’s new wooden deck, which will overlook Lake Thoreau, Mayhugh said.

Other construction activities on the horizon include laying a new stormwater pipe that will go under the parking lot, followed by pouring for new retaining walls around the site.

Going forward, the contractors will generally be working from 7 a.m. to 3 p.m. Monday through Friday, according to Mayhugh. RA still estimates that construction will take about a year, projecting a potential opening in summer 2023.

“In the next coming months, we anticipate machinery still coming through the site, which will make noise,” Mayhugh said. “We appreciate your patience, and we can’t wait to see this wonderful new facility open up this summer.”

Lake Thoreau’s pool has been closed since 2020 for the renovation project, which was originally scheduled to break ground last fall.

The new facility will have a pool with six lap lanes and a ramp to provide ADA access, a redesigned deck, a larger 25-space parking lot, an overlook with a pollinator garden, and expanded bathhouses, which have been moved away from the spa.

According to RA, the overall project carries an estimated cost of $3.5 million, which hasn’t changed despite inflation and supply challenges affecting the construction industry in recent months.

“It is possible that at some future date that could change due to inflation or other factors, but at the present time, that is not the case,” RA spokesperson Mike Leone told FFXnow.