Construction crews are moving forward on an affordable residential complex at Arrowbrook Centre by the Dulles Toll Road and Centreville Road.

As of Thursday, owner SCG Development reported it had completed 31% of the project, dubbed Ovation at Arrowbrook, setting its sights on an early 2023 completion.

“We will begin pre-leasing units at the end of 2022,” Jennifer Schneider, SCG vice president of development, said in an email.

The project will make 274 affordable apartment homes for households earning between 30 and 60 percent of the area median income. It will remain designated as affordable for at least 50 years.

The development will include 55 three-bedroom units and 15 handicap-accessible units.

It will be located next to Arrowbrook Center Park, a townhome and condominium community that Pulte will develop. A high-rise building with a hotel, offices, and condominiums is also planned on the site, Reston Now previously reported.

The development puts it next to a soccer field and the forthcoming Innovation Center Metro station. Other projects nearby going up by the transit stop include Passport apartments and Liberty Park condos and townhomes.

It is officially summer, and with Virginia anticipating an end to its COVID-19-induced state of emergency, the next couple of months will bring an abundance of live music for Reston and Herndon residents to enjoy.

The season’s offerings will include the in-person returns of “Hunter Mill Melodies” and “Music at Arrowbrook Park,” two free outdoor concert series organized by the Fairfax County Park Authority for its 2021 Summer Entertainment Series.

Hunter Mill Melodies will be back at Herndon’s Frying Pan Farm Park with performances at Kidwell Farm (2709 West Ox Rd.) at 7:30 p.m. every Thursday in July and August.

Frying Pan will also host a children’s entertainment series at its visitor center pavilion (2739 West Ox Rd.) every Wednesday at 10 a.m. as part of the park authority’s Arts in the Park family-friendly series.

“This free entertainment series features a wide variety of musical acts from across the United States and from around the world,” Hunter Mill District Supervisor Walter Alcorn said in a note. “The variety and quality of the acts is a reflection of Fairfax County’s diversity and community spirit, some of the many qualities that make this a wonderful place to call home.”

The full Hunter Mill Melodies and Music at Arrowbrook Park schedules are as follows:

Arts in the Park

The Fairfax County Park Authority announced on June 9 that its Summer Entertainment Series would return in person after going virtual last year.

According to the FCPA news release, the county started the initiative to create “a renewed sense of community” in the vein of small-town gatherings around bandstands in local town squares or parks. The performances are funded by private donations given to the Fairfax County Park Foundation.

For additional local live music options, community members can turn to the Reston Community Center, which launched multiple free summer concert series earlier this month, and Friday Night Live!, which will be back in the Town of Herndon starting July 2.

Reston Town Center, however, announced in April that it has canceled its Reston Concerts on the Town series for a second year in a row, citing the continued uncertainty at that time over whether Virginia would still have restrictions on large events over the summer.

Reston Concerts on the Town said that it had retained much of its planned lineup from 2020 and is now working to move those same artists to summer 2022.

“We miss you all and look forward to safely and joyously rocking out together in 2022!” the Facebook post said.

A 274-unit affordable housing building near the Innovation Center Metro Station is officially one step closer to groundbreaking.

Real estate development firm SCG Development, the county, and the Fairfax County Redevelopment and Housing Authority closed on financing for the project, known as Ovation at Arrowbrook. The building brings 274 affordable apartments to the Arrowbrook mixed-use development, which is located at the intersection of Centreville Road and Arrowbrook Centre Drive in Herndon.

In a statement, Dranesville District Supervisor John Foust said noted that the Northern Virginia market is struggling to offer affordable options for stable and safe homes.

“The Ovation at Arrowbrook represents a huge leap forward by providing many of these hard-working households the opportunity to establish roots, raise their families, and benefit from all the advantages that life in Fairfax County affords.”

A combination of local Housing Blueprint funds, project-based vouchers, and revenue bonds were used to finance the project.

“The financing component of the Arrowbrook development not only reflects the significance of our commitment to the development of affordable housing throughout Fairfax County, but it is an exceptional showcase of several of the tools we have to bring these developments a reality,” said newly elected FCRHA chair, Melissa McKenna.

The apartments serve housings earning between 30 and 60 percent of the area median income and will remain designated as affordable for a minimum of 50 years. The development includes 55 three-bedroom units and 15 handicap accessible units.

Construction on Ovation will begin next month and completion is expected to take place by the end of 2022. 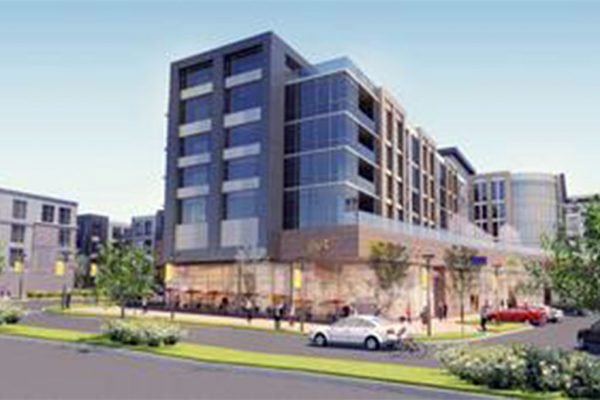 The county plans to close on a long-awaited workforce housing development in Herndon this fall.

Construction on the 274-unit project, which is located south of the Dulles Access Road, will be completed in the summer of 2022.

Once construction is completed, roughly $7.7 million in Housing Blueprint funds will be issued.  The Fairfax County Housing Redevelopment Authority will also issue roughly $22 million in bonds for the transaction this summer. Closing is expected in the fall.

“We’re really excited about this one,” said Tom Fleetwood at a Fairfax County Board of Supervisor’s housing committee meeting earlier this week.

The rental community targets households with incomes at or below 30, 40, 50 and 60 percent of the area median income (AMI). The county will provide 14 units using state and federal vouchers that target households at 40 percent of the AMI. Half of the remaining units will be financed through Low Income Housing Tax Credits.

A Feb. 2019 market feasibility analysis noted that Arrowbrook Centre is located in a market area. That is “younger, affluent section of an equally affluent county.” Roughly 40 percent of the primary market area’s renters are young adults under the age of 35, according to the report.

The Fairfax County Board of Supervisors unanimously approved changes to Arrowbrook Centre, a proposed mixed-use development that was approved in 2005 for more than two million square feet of development.

The company behind the massive development, which is located near the future Innovation Center Metro Station, received the county’s blessing yesterday (April 14) to convert previously planned high-rise residential buildings into single-family homes and mid-rise apartment units.

The changes, which are restricted to a 3.4-acre section of the 54-acre site, reduce the residential component of the site from 480 to 392 units.

Describing the development as “first-class,” Dranesville District Supervisor John Foust said Arrowbrook Centre would help create a “sense of community in that area.”

“This is a very straightforward case,” he added.

The developer also plans to incorporate an asphalt trail that was suggested in the Herndon Metrorail Stations Access Management Study to connect to the future Innovation Center Metro Station.

John McGranaham, the applicant’s representative, noted that the developer is committed to completing the trail once easements and appropriate approvals are granted.

“It’s an important trail to have open when the Innovation Station opens shortly,” McGranaham said.

Tweaks to Arrowbrook Centre, a mixed-use development approved in 2005 for more than two million square feet of development, are being proposed.

The developer behind the project, which is near the intersection of the Dulles Toll Road and Centreville Road, is seeking to shuffle residential units from one building to another and the change the shape of one building from a L-shape to a U-shape. Roughly 78,000 square feet of footage will be reserved for a future application.

Other proposed changes include adding up to 32 multi-family units and 10 single-family units to a second building. Changes only apply to a 3.4-acre section of the 54-acre site.

“This change would create a more cohesive community and better respond to market demand in this Metro Station area,” according to the proposal, which was submitted in mid-May.

The Fairfax County Board of Supervisors approved the project in 2005. Roughly 280,000 square feet of development were added to the site with the county’s approval in 2015.

Overall, no increase in the total gross square footage or buildings heights isis being proposed.

The Fairfax County Planning Comission will review the project in January next year. 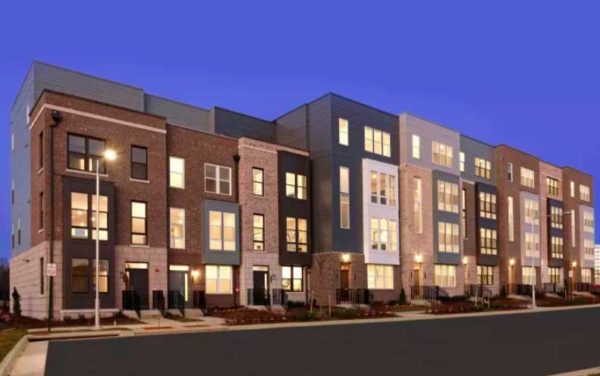 The Arrowbrook Centre development, a mixed-use project approved by the county in 2005, is finally moving forward.

The owner of the site, which is near the future Innovation Center Metro Station, plans to build a 274-unit workforce housing project on the site. The project is expect to break ground near year and deliver in 2022, according to a Bisnow report.

Overall, the site includes 2 million square feet of development. The residential component of the project will move forward while the high-rise commercial component will linger on the drawing board until office demand increases.

In February, the county approved a $2.8 million loan to help SCG Development finance the project. A spokesperson for the developer said that the company plans to lease 36,000 square feet of retail in the building.

“It is important to create a walkable, mixed-use community with amenities,” Gravett said. “It’s an evolution of creating a cool place to be. The important part is that people want to live there.”

The Arrowbrook Centre development site, near the intersection of of the Dulles Toll Road and Centreville Road, is owned by the Ruth and Hal Launders Charitable Foundation. The Launders family has owned the property since 1947 and operates it through the entity Arrowbrook Centre LLC…

The highest-density part of the Arrowbrook Centre project is planned on a 10-acre parcel along the Dulles Toll Road and near the future Silver Line station. That portion would include three office buildings totaling 645K SF, a 150K SF hotel and a 250K SF high-rise residential building.

Jeffrey Fairfield, the manager of Arrowbrook Centre LLC, said the ownership group has been waiting for the office market to improve on the Toll Road before selling the commercial portions of the site to developers.

“If you had asked me in 2000 if it would take this long, I would have said no,” Fairfield said. “But in retrospect, I’m not surprised. Real estate development takes a long, long time.”

The developer went back to the county three years ago to add 280,000 square feet to the overall development, which was originally approved in 2005.

Pulte Homes is in the process of developing townhouses and condo units on the property.