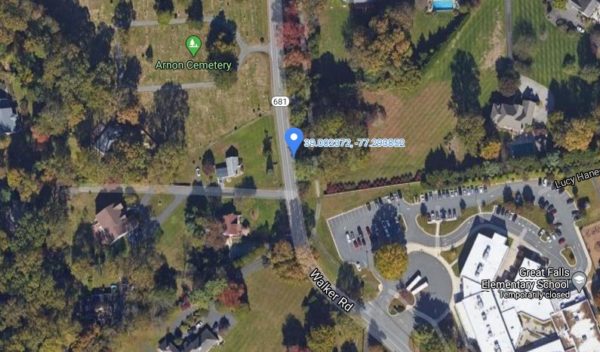 The crash happened shortly before 5 p.m. in the 700 block of Walker Road — near the Great Falls Elementary School and Arnon Cemetery.

“A preliminary investigation determined the Ford F350 was traveling eastbound on Walker Road when it crossed over the double yellow, left the roadway and struck the Dodge Ram that tried to avoid the crash,” police said. “Subsequently, the Ford F350 struck a utility pole and overturned back onto the roadway.”

Detectives are investigating the crash. They do not believe alcohol was a factor, but are looking into whether speed or a medical emergency contributed to the crash, police said.

Anyone with information about the crash can contact the Crash Reconstruction Unit at 703-280-0543. 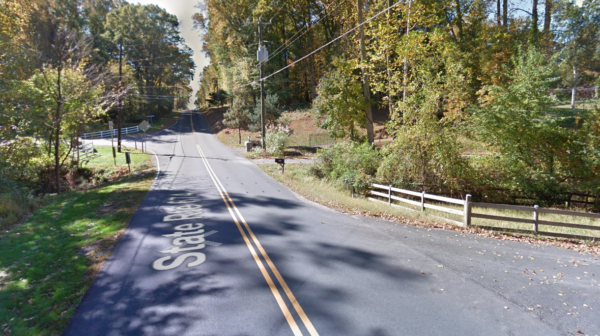 A two-car crash along Springvale Road has sent one person to the hospital with minor injuries and caused the road to close.

Fairfax County sent out an alert about the crash and road closure near the intersection of Parkerhouse Drive at 9:46 a.m. today (Friday).

Sgt. James Curry, a police spokesperson, told Reston Now that one person was taken to the hospital with non-life threatening injuries.

The road is currently closed in both directions, Curry said that it is expected to reopen soon.

A South Lakes High School student was killed in a car crash on Sunday (November 3) in Oakton.

Carter Smith, a junior at the school, was one of five passengers in the car, which was travelling eastbound on Stuart Mill Road around 6:30 p.m. that day when the car ran off the right shoulder and hit a tree, according to the Fairfax County Police Department.

Five teenagers who were in the car at the time were taken to local hospitals. The driver remains in life-threatening condition. The SLHS student was pronounced dead at the hospital and the three other passengers were treated for injuries that are not life-threatening.

Police believe speed may have been a factor in the accident. Preliminarily, alcohol and drugs do not appear to be factors that led to the crash.

On Monday (Nov. 4), Retzer wrote the following in a letter to the SLHS community:

Our sincere condolences are extended to family and friends of all involved, and to all members of our community who may be hearing of this terrible incident. I will maintain contact with the family and share about funeral services as that information becomes available.The unexpected death of a young person is very sad and difficult to process and can have an impact on anyone, whether they knew the person or not. South Lakes will provide counselors and clinical team members tomorrow, Tuesday, from 9:00AM to 12:00PM. Students should gather in the Lecture Hall. We will have additional supports on Wednesday as well when all students return.

Anyone with information about the incident should contact FCPD’s crash reconstruction unit at 703-280-0543.

No other information about the incident has been released.

Local police are investigating a crash involving two motorcycles that happened in late May.

A driver was turning left at the intersection of Reston Parkway and Lawyers Road on May 25 when another motorcyclist collided into his bike.

Donald Collins was arrested for a DWI and was taken to Reston Hospital Center for treatment, according to an affidavit filed on June 5.

A Reston man was killed at the scene of a five-vehicle crash on a highway in West Virginia over the weekend.

John King, 32, was killed on the scene on Saturday, according to a statement by the Jefferson County Sheriff’s Office. Nine people were injured in the crash.

A tractor-trailer failed to slow down in the northbound slow lane on U.S. 340, which is south of Charleston, pushing one vehicle into the other, according to Herald-Mail Media. The four pushed vehicles were mostly mangled, according to the sheriff’s office.

Two of the nine people injured — who were in the same car as King — are from Northern Virginia. Identities of the injured have not been released.

The tractor-trailer was carrying 80,000 pounds of potatoes, Herald-Mail Media reported.

A home on the 11300 block of Geddys Court was damaged Sunday night after a car crashed into it.

The car went through the garage, part of the home and into the backyard at around 6:23 p.m. on Sunday, according to the Fairfax County Fire and Rescue Department.

Crews assembled a vertical shore to stabilize the wall. No injuries were reported. 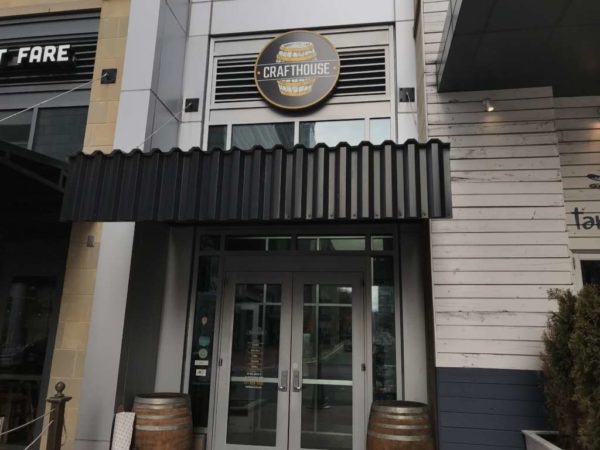 Car crash update — On Friday (March 20), “units responded to a car crash on Lawyers Road and Pegasus Lane in Reston area. Crews arrived to find two people trapped. Units were able to quickly work to free them. Both transported to area hospital with non-life-threatening injuries.” [Fairfax County Fire and Rescue]

Yoga among the books — From 5:30-6:30 p.m., adults can do yoga at the Herndon Fortnightly Library. [Fairfax County]

Parks and Rec meeting — The Reston Association’s Parks and Recreation Advisory Committee will meet from 6:30-8:30 at RA headquarters. [WebTrac] 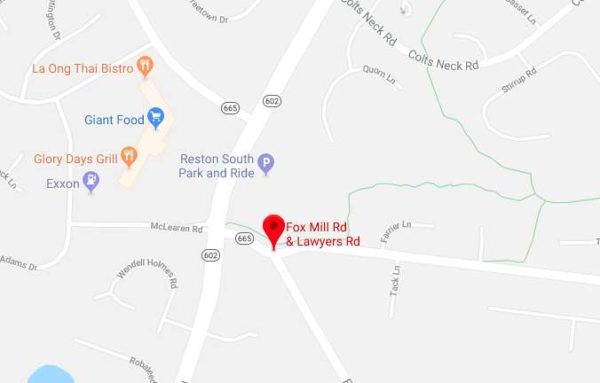 Fairfax County Police tweeted that the closure is “due to a crash and pole down.”

A traffic alert from Fairfax County indicates that the crash happened shortly before 2:47 p.m.

There is no word yet on whether anyone has reported injuries.

Police advise people to avoid the area and find an alternative route. 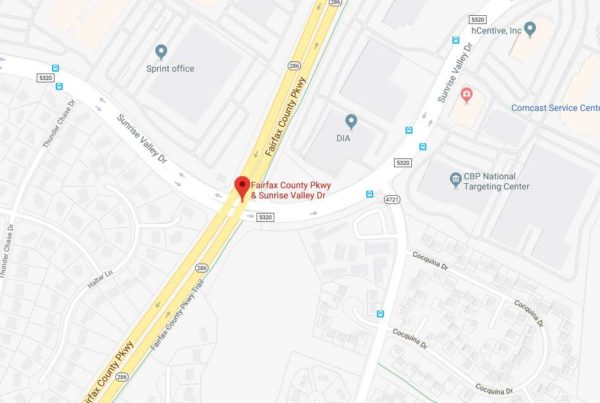 Northbound on Fairfax County Parkway near Sunrise Valley Drive was shut down around 1:20 p.m. as crews work to free a trapped driver from a crash.

Fairfax County sent out a traffic alert at 1:21 p.m. about the crash.

Six minutes later, Fairfax Fire and Rescue tweeted that crews were on the scene of the two-vehicle crash.

Crews freed the driver about 10 minutes later. Two people were transported to a hospital with non-life threatening injuries, according to a second tweet at 1:36 p.m.

A car crash involving several cars on Route 7 sent four people to the hospital with non-life-threatening injuries earlier this morning.

Units from Station 39 in North Point responded to the incident, which happened as icy and snowy conditions swept down on much of the area today.

The driver of one car was trapped and was removed from the vehicle.

No other information about the incident was immediately available. 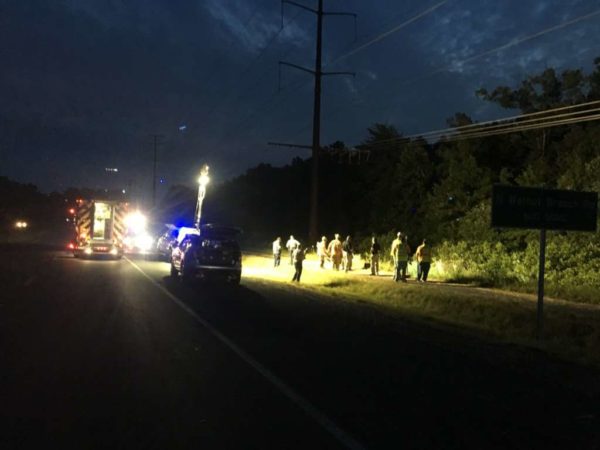 Two people were killed and two others were injured after an early morning crash on Fairfax County Parkway near Walnut Branch Road yesterday.

Tonnisha McCoy, 21 and Joselyn Herndon, 23, were killed in the crash.

Detectives are looking for witnesses to help with the investigation. Alcohol and speed may have been factors that caused the crash around 2 a.m. on Sunday.

Police believe the driver lost control of the car as it traveled northbound on Fairfax County Parkway. The car rotated and left the roadway.

At least one other car was on the scene during the crash and remained on-site when officers arrived.

Due to the complex nature of the investigation, detectives are asking anyone who may have witnessed the crash or has information to call 703-280-0564.

Two people were killed and two others were injured in a car accident that happened around 2:30 a.m. on Sunday.

A crash reconstruction unit is investigating the incident. Two people were taken to the hospital with non-life threatening injuries.

(Updated at May 21 at 3 p.m. to include information about traffic and on May 22 to include her identity) A 71-year-old woman was hit by a car and killed at the intersection of Reston Parkway and Bluemont Way.

At around 11:20 a.m., Glanetta  Nunn was crossing the road when she was hit by a car. The driver remained on scene.

Nunn was identified as the pedestrian on Tuesday (May 22).

A crash reconstruction unit tasked with investigating the incident concluded its work around 2:30 p.m. All lanes are now open.

According to passersby, a mangled baby stroller was visible at the location of the incident.