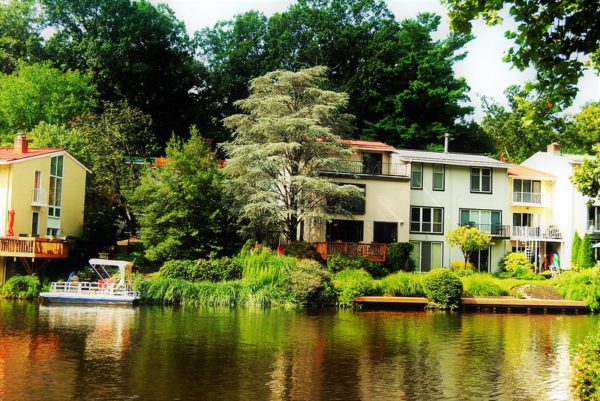 Report on Oral Health in Virginia — “Gaps in oral health access and utilization between lower-income and higher-income Northern Virginians are as profound as they were a decade ago, report cites.” [Northern Virginia Health Foundation]

Cornerstones to Host Forum on Economic Stability — The Reston-based nonprofit organization is hosting a forum with elected officials on economic recovery in Northern Virginia after the COVID-19 pandemic. The forum takes place online tomorrow (Thursday) at 5:30 p.m. [Cornerstones] 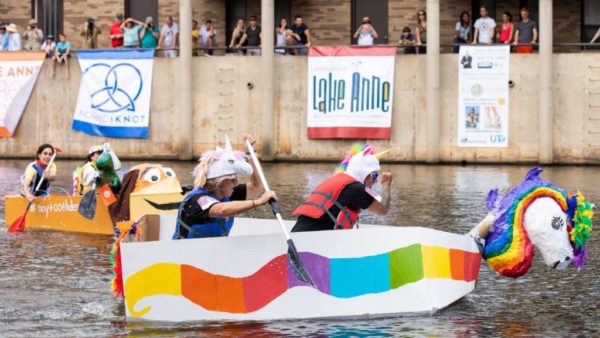 Due to health concerns posed by COVID-19, the Lake Anne Cardboard Boat Regatta will return sometime next year.

But Restonians can take part in a different cardboard-related challenge. The Reston Historic Trust and Museum is hosting an at-home cardboard challenge.

Residents can submit cardboard fabrications of their favorite Reston place, landmark or boat. Entries must be entirely made of cardboard and duct tape. Submissions are due by August 31.

Those interested can also register online to have their creation exhibited inside the Reston Museum in October and receive a trophy from NovaLabs.

Registration is not required to participate, but only registered participants will be eligible for the exhibit and award. Awardees will be notified in September 2020.

The first-place winner for the following categories will be selected for the exhibit:

Guidelines for the competition are below the jump.

END_OF_DOCUMENT_TOKEN_TO_BE_REPLACED 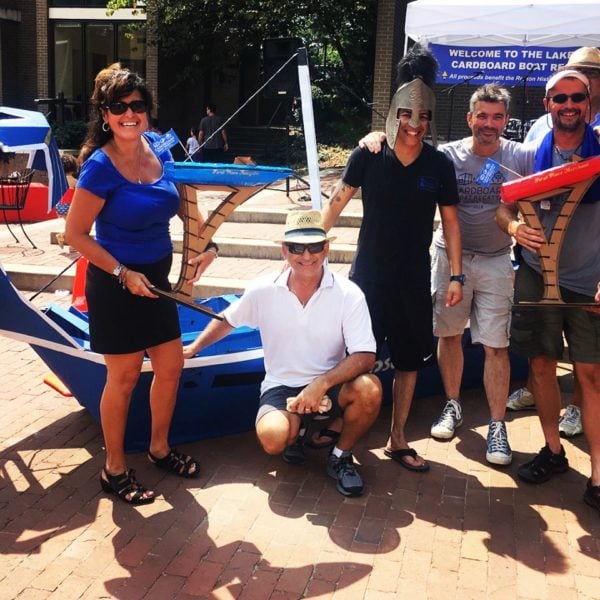 A record-breaking number of teams are set to participate in the third annual Lake Anne Cardboard Boat Regatta on Sunday, August 10.

Registration for the event has been closed and is at full capacity. Seventy teams are registered.

The owners of Kalypso’s have been working on the their boat for weeks in an effort to defend their title in the merchant award and first place in the navigator class.

The event is free and will take place rain or shine.

More than 1,000 people took part in the annual Lake Anne Cardboard Regatta on Saturday. Cardboard boats of all shapes and sizes bobbed and sped across the lake as participating teams competed against each other.

Alexandra Campbell, the executive director of the Reston Historic Trust & Museum, said this year’s event — only the second thus far — was a success. More than 400 people took part in voting for the best cardboard boat before the race even began, she said.

“We were so excited to be continuing the event this year [and] were thrilled to have another fun race,” Campbell said, “We are grateful to all the support from our sponsors and volunteers this year.”

The event is organized by the Reston Historic Trust & Museum and all proceeds from the event benefit the organization.

The winner’s for the race are below:

Next year’s race will be held on Saturday, Aug. 10. All pre-registration slots have been filled for next year. Registration from other teams will open for the public next year. 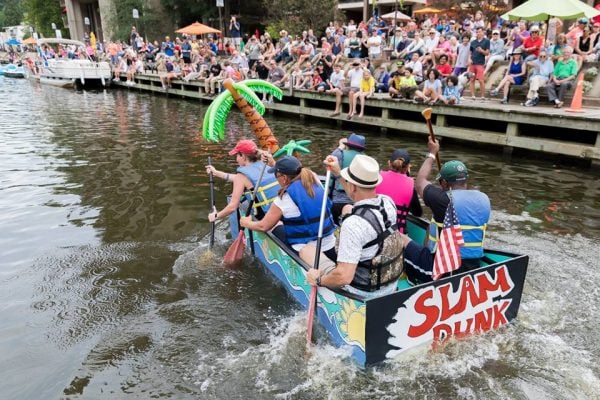 For the second year, homemade cardboard boats will compete in the popular regatta at Lake Anne. All proceeds from the event on August 11 will go toward the Reston Historic Trust & Museum.

Participating teams of all ages will construct and decorate a life-size cardboard boat, which will compete in timed heats. Team members will row to a designated buoy and back to the docks.

Last year, 20 teams and more than 65 individuals participated in the event. The event is presented by the museum and the lead sponsor is Griffin-Owens Insurance. Other sponsors include Reston Association and Aperture.

Registration for the event is not open yet. During last year’s regatta, 30 preregistration slots were filled for this year’s event. A waiting list with 20 additional slots is available online. Registration will be opened to the public when the number of maximum competing teams is determined by organizers.

Awards were given in three categories: Cadet Class (all-student teams), Navigator Class (teams with a mix of students and adults) and Skipper Class (all-adult teams). Winners were:

In case you missed it…our final heat of the day with Lake Anne Brew House and Lake Anne Coffee House! We so…

The “Titanic” trophy, for the boat that sank most spectacularly, went to the Batboat Mobile.

A pre-event “launch party” was held Friday night, at which design awards were given:

All proceeds from the event benefitted the Reston Museum and Historic Trust.

Based on the success of this year’s event, the Museum has announced it will hold its second Cardboard Boat Regatta on Aug. 11, 2018.

Makeshift boats will be taking over Lake Anne this weekend for a first-of-its-kind Reston event.

The Lake Anne Cardboard Boat Regatta will take place Saturday from 2-6 p.m. at the plaza. A pre-event “launch party” is scheduled for 6-9 p.m. tonight.

Participants in the event will be using self-constructed and decorated boats, which will take to the water in timed heats. Some extraneous material could be used in building the vessel, but there are many rules and limitations to what could be utilized. Prizes will be awarded to the fastest boats in each category, as well as the “Titanic” award for the ship that sinks “most spectacularly.”

It should be fun for all, participants and spectators alike.

There will be plenty else to do in the area this weekend as well. Get out there and enjoy Reston.

Registration Deadline Extended to August 6th!!! We are "Going Bananas" too! We are so excited for the Lake Anne Cardboard Boat Regatta on August 12th!⠀⠀ ⠀⠀ We've been sharing some creative examples of cardboard boats, now its your turn to create your own. REGISTER TODAY at https://www.restonmuseum.org/cardboard-register ⠀⠀ ⠀⠀ #restonmuseum #restonva #lakeannecardboardboatregatta #lacbr #lakeanne #supportRHT #creativity #cardboardboats

If you missed Tuesday’s deadline to register for Lake Anne’s first Cardboard Boat Regatta, scheduled for later this month, never fear. The deadline to get a craft registered for the event has been extended to Sunday, Reston Museum announced Wednesday on social media.

The museum has been sharing numerous examples of possible boat designs on its Instagram account in recent days, including a shark, a tractor, a pirate ship and more.

Participants in the event will be asked to construct and decorate their own boats, which will take to the water in timed heats. Some extraneous material can be used in building the vessel, but there are many rules and limitations to what can be utilized.

“We can’t wait to see the creativity that everyone is putting into their cardboard boats,” said Elizabeth Didiano, executive director of the Reston Historic Trust & Museum. “Some teams are designing colorful, flashy boats while others are focusing on what will help their boat float the best.”

For more information or to register a boat, visit the event’s webpage or contact the Reston Historic Trust at 703-709-7700 or [email protected]. 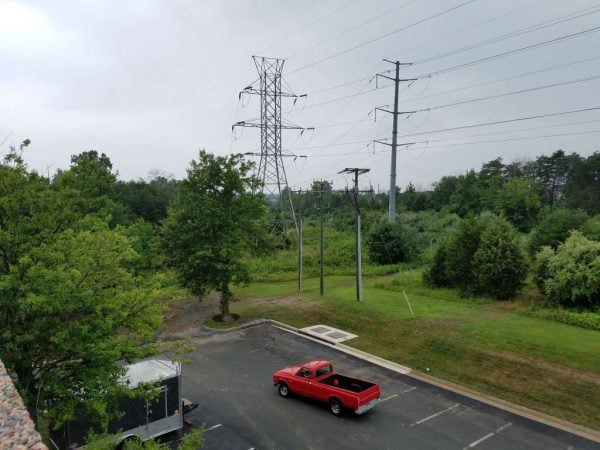 ‘Turn Around, Don’t Drown’ — With heavy rains expected today and Saturday, the possibility of flash flooding exists. County officials are reminding residents that cars should not be driven through flooded roadways. [Fairfax County Fire and Rescue]

Police Seek Suspect in Vienna Stabbing — Fairfax County Police have been searching since Thursday morning for the suspect in a stabbing that took place near the Vienna Metro station. The victim suffered non-life-threatening injuries. The suspect is a male of unknown race, about 5 feet 7 inches tall, with a medium build, and a light- to medium-brown complexion. He was wearing a black, hooded shirt pulled over his head. [Fairfax County Police Department]

New Name Coming for J.E.B. Stuart High — By 2019, the Falls Church school named after a Confederate general will have its name changed. The Fairfax County School Board voted last night to make it happen. [NBC Washington]

Connolly: Trump’s Boy Scout Speech Shameful — In a letter to the national president of the Boy Scouts of America, Rep. Gerry Connolly (D-Va.) says the BSA should denounce the speech President Trump gave recently at the National Scout Jamboree. Connolly says Trump’s politicized rhetoric “directly contradicted the spirit of Scouting and the tenets of Boy Scout Law.” [The Hill]

If you have the thirst to tap into your inventive side, this summer you’ll have the chance to quench it.

In August, homemade cardboard boats will compete in a first-of-its-kind regatta at Lake Anne. All the proceeds will go toward the Reston Historic Trust & Museum.

Participating teams of all ages will construct and decorate their own life-size cardboard boats, which will then take to the water in timed heats. Each team will row on a course that leads to a designated buoy before returning to the docks at Lake Anne Plaza.

There will be awards for the fastest cardboard boat in each category as well as an award for the most “Titanic-like” boat, i.e. the fastest one to sink.

The event’s rules include:

“There is no limit to the number of rowers or participants assisting with the construction of the cardboard boat,” according to a press release. “So throw a boat-building party and get creative.”

The event is scheduled for 2-6 p.m. Saturday, Aug. 12. Volunteers are also needed.

For more information or to register a boat, visit the event’s webpage. Team sponsorships for adults start at $100, while children between 10-18 years of age pay $40.