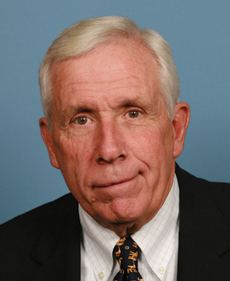 Congressman Frank Wolf (R-Va. 10th), represents nearby parts of Fairfax and Loudoun County in the U.S. House since 1980, announced on Tuesday he will not seek an 18th term next year.

Wolf released the info in a statement:

“I have decided not to seek re-election to the U.S. Congress in 2014.  It has been an honor to serve the people of northern Virginia and the Shenandoah Valley.  I thank my constituents for giving me the privilege of representing them in Congress for 34 years.

“As a follower of Jesus, I am called to work for justice and reconciliation, and to be an advocate for those who cannot speak for themselves.  I plan to focus my future work on human rights and religious freedom – both domestic and international – as well as matters of the culture and the American family.  My passion for these issues has been influenced by the examples of President Ronald Reagan, former Congressmen Jack Kemp and Tony Hall, Chuck Colson, and the life of 18th century Member of Parliament William Wilberforce.

“I want to thank the many excellent former and current members of my staff who have helped me serve the people of the 10th District.  I am also grateful to my wife, Carolyn, and my family, who have faithfully stood by me all these many years.”

Local Democrats had already been talking about Fairfax County Supervisor John Foust running against Wolf in 2014. It would have been a hard race though — Wolf has earned less than 57 percent of the vote since 1982, The Washington Post says.

Wolf is the eighth House Republican to announce his retirement in 2014.

Virginia Sen. Mark Warner called “a true friend, and a great partner, both when I served as Virginia Governor and since I’ve joined Congress.”

“We have worked closely together on Northern Virginia transportation issues, and partnered in consecutive sessions of Congress on bipartisan legislation that would encourage the on-shoring of jobs back to Virginia which have moved overseas in recent years,” Warner said in a statement.

“Frank has also been a passionate advocate and reliable ally in my ongoing efforts to find common ground on issues surrounding our nation’s deficits and debt. He is a tireless and leading advocate for religious freedom around the world. We will miss his delegation leadership.”