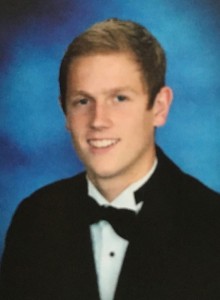 The body found in an Adams Morgan alley on Thursday has been identified as Reston college student Paul McGuinness Jr., a police spokesman told The Washington Post.

McGuinness’s family members have also said it was McGuinness, 19, whom they found lifeless at the bottom of a stairwell in the 2400 block of 18th Street in DC.

The family members told TV reporters they spent hours searching the area after McGuinness was reported missing on Wednesday.

They said McGuinness had gone to Adams Morgan with a cousin and was last seen about 1:30 a.m. at a bar, Madam’s Organ, located at 2461 18th St.NW

McGuinness was a 2015 graduate of Herndon High School who was home on winter break from his freshman year at Virginia Commonwealth University.

“He was a JOY,” said Dannielle LaRosa, a Herndon High parent. “He always had a smile for everyone. I am heartbroken.”

McGuinness attended Bishop O’Connell High School in Arlington before transferring to Herndon for his senior year. He played on the Hornets’ football team in the 2014 season, according to the HHS yearbook.

Police are still investigating the cause of death and what exactly happened early Wednesday, but foul play is not suspected.

This is the second tragedy to hit the Herndon High Community in the last five months. In August, three members of Herndon High’s Class of 2014 – Kyle Mathers, Holly Novak and Dale Neibaur – were killed in a car crash on their way to a gaming festival near Austin, Texas. A fourth HHS grad, Kevin DiCicco, was badly injured in the crash.