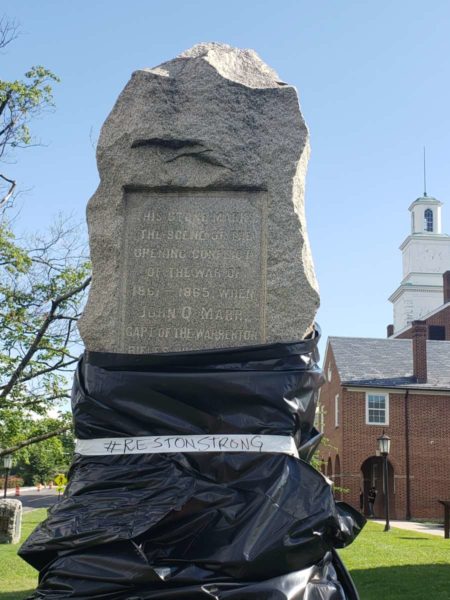 Reston Strong, a local community advocacy group, offered a direct message when residents covered a Confederate monument in front of the old Fairfax County courthouse with tarp and white duck tape over the weekend.

The issue has prompted Fairfax County elected officials to request a complete report of Confederate street names, monuments and public places in the county.

Although the black tarp and tape that smother the statue was removed within an hour after installation on Sunday, the group says that it is time for the county to remove the 1904 granite monument that honors Confederate Capt. John Quincy Marr, who died roughly 800 feet from this marker in 1861.

The hashtag #restonstrong was written over white duck tape around a Confederate monument late last week as local residents. Some local and state elected officials have bowed to public demands to remove statues and monuments honoring Confederate leaders in recent weeks.

Located at 4000 Chain Bridge Road, the monument is dedicated to Marr, the first Confederate officer killed in the Civil War. “Union cavalry attached the city at 3:00 a.m. on June 1, 1861. The Warrenton rifles commanded by Marr defended the city,” according to information recently taken down by Fairfax County’s tourism board.

The Fairfax County Board of Supervisors will discuss the issue at a meeting later this afternoon. Providence Supervisor Dalia Palchik and Hunter Mill District Supervisor Walter Alcorn plan to request a full inventory of Confederate names in public places in Fairfax County. The monument is located in Palchik’s district.

“Fairfax County residents stand together with fellow Americans in support of the recent movement for racial justice, brought on by the horrific deaths of George Floyd, Ahmaud Arbery, Breonna Taylor, and others,” the board matter reads. “This powerful call for equity has brought attention to Confederate monuments and place names throughout the County, and the painful history they symbolize.”

Reston Strong issued the following response to today’s board matter:

We would like to Thank Supervisor Palchik for her response however we are saddened to note her motion while timely, fails to directly address our ask. We understand this topic is more polarizing than most and sincerely hope the below sentiments from our members will give our leaders the strength needed to take immediate action.

REMOVE – “It’s literally trauma!! The statue doesn’t erase the history! But the statue does remind my people each time they are disposed, mishandled in the judicial system where this statue resides that things will always be unjust and unfair, we’ve gotta take it, swallow it and keep hoping one day we will be free for real #free-ishsince1865″ – Candace Wiredu-Adams

RELOCATE – “Move it to a museum. We can’t just throw our past away. People wouldn’t believe the holocaust existed without seeing certain artifacts. We need to have these tangible items to provoke the emotion. We can’t just have pages in a textbook saying a statue was taken down.” – Rebecca Johnson

REPLACE – “I think markers at the places of important events is great. Nothing like standing right where it happened and reflecting. However, I don’t think we need monuments to people. So to me, two different things. I think the markers are a good reminder of history and where it happened (in some cases in our own backyard!). Glorifying people, not so much.”  – Colleen Montgomery

Hundreds of protestors lined Reston Parkway on Sunday evening to take a stand for George Floyd and racial justice.

Cars honked as protestors of all ages stood with signs in the peaceful demonstration, which was organized by a local community group, Reston Strong. Some chanted while others stood with masks. Groups gathered in Reston’s heart — Reston Town Center — in support of the Black Lives Matter movement.

Organizer Sarah Selvaraj-Dsouza, who started Reston Strong, said the number of Reston neighbors who joined the effort gives her hope in the “transformative” nature of the movement. She estimates more than 5,000 people took part.

“We must continue the drumbeat for justice and loudly demand meaningful change. Tonight we came together to say our community believes Black Lives Matter. We have put out specific demands tonight and we will not stop till these are achieved,” she said.

Participants signed a #signthesign petition, which will be delivered to the Fairfax County Police Department and Commonwealth’s Attorney  Steve Descano.

The petition calls on FCPD to create a public, official database on use of force incidents among police officers. They are also demanding justice for Bijan Ghaisar, a 25-year-old resident of Fairfax, who was killed by U.S. Park Police after a stop-and-go chase in 2017.

The Dulles Toll Road was closed between Wiehle Avenue and the Herndon-Monroe Park & Ride to accommodate the protest. 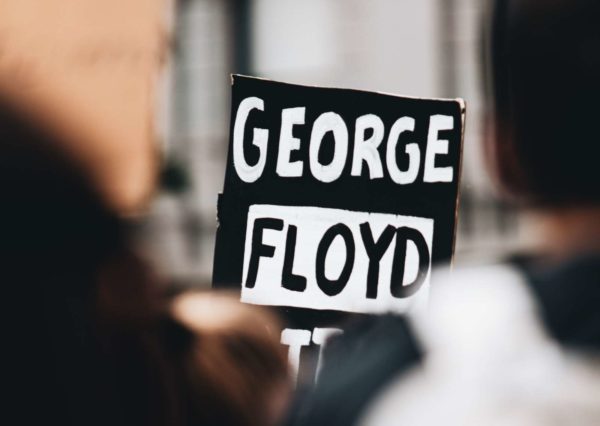 Editor’s note: This event has been postponed to Sunday due to possible rain.

Local Restonians are planning a “demonstration of solidarity” in Reston tomorrow (Friday) following the killing of George Floyd. Protests have spread to more than 400 localities in the United States as demonstrators seek justice for Floyd and speak out against police brutality.

Floyd, a black man, was killed while he was in police custody on May 25. Former Minneapolis police officer Derek Chauvin was arrested days after a video circulated of him holding his knee to Floyd’s neck for more than eight minutes before he died.

The demonstration is organized by Reston Strong, a volunteer-run advocacy group based in Reston.

Organizer Sarah Selvaraj-Dsouza — who spoke in her personal capacity and not as a Reston Association board member — said the event is organized in support of the Black Lives Matter movement.

“This demonstration is an opportunity for the community to come together to stand up to racism and commit to advocating for racial justice. We are also hopeful that efforts like this one will encourage all Reston residents, especially the most privileged among us, to consider how they can use their resources to affect meaningful change,” she said.

Demonstrators plan to meet at Reston Parkway near the Dulles Toll Road overpass at 7 p.m. Masks are required during what organizers say will be a “socially-distanced and peaceful demonstration.” Although no speeches are planned, participants will hold candles, flashlights, or phone lights to illuminate their path.

Residents can also take part by posting a photo with the hashtag #restonstrongforgeorge or by turning off lights at 9:25 p.m. for a one-minute blackout.

“All across our nation, people are coming out to show solidarity and support for the Black Community. Reston, VA is full of citizens who practice compassion, love, empathy for all. And now, we stand up together to say, #BlackLivesMatters. We are telling our friends, our neighbors, our loved ones – they matter, they are important, and they are precious to us.”

In an unrelated car rally by the Fairfax County NAACP yesterday (Thursday) , residents and local elected officials gathered to voice support for the black community and their struggle for justice.

“Justice will not be reached if a community does not stand together,” said Fairfax County Board of Supervisors Chairman Jeff McKay.

Hundreds gathered tonight at the NAACP Car Rally at the Gov’t Center including members of my family, staff, Board of Supervisors and Police Dept. Uplifting to see so many of our community come out to show support. A lot more work to be done. #HunterMill pic.twitter.com/JaBR9YPbr7

Proud to be with the Fairfax County NAACP and County residents tonight to listen and learn about the centuries of struggles African Americans have faced and the anger and sadness you are feeling. Justice will not be reached if a community doesn’t stand together pic.twitter.com/A5pUUWrLIp