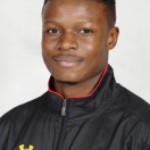 Reston’s Suli Dainkeh, a 2013 South Lakes High grad, started for the University of Maryland in the NCAA College Cup Soccer Championship on Sunday at PPL Park in Chester, Pa.

The Terps lost to Notre Dame 2-1. Dainkeh, who played midfield for the Seahawks, played in 23 of 26 matches for Maryland this season, primarily as a starting central defender.

Maryland was the No. 5 seed in the NCAA Tournament and won 11 consecutive games before falling to the Fighting Irish.

During that streak, Dainkeh and the other defenders conceded just five goals.

Dainkeh, who played on on the U.S. Men’s U-18 team and was a member of D.C. United Academy,  was named  2103 Gatorade State Player of the Year in Virginia and was a First Team All-Met, All-Region and Liberty District selection. He helped lead the Seahawks to a 12-1 regular-season record last spring.

Read more about Dainkeh’s journey from Sierra Leone to Reston.