An announcement Tuesday morning from the Trump Administration that it will be ending the Deferred Action for Childhood Arrivals (DACA) immigration policy has elicited spirited response from Virginia’s Democratic delegation in Congress.

Attorney General Jeff Sessions made the announcement Tuesday morning on behalf of the Administration. Afterward, both of Virginia’s senators released statements of outrage on their Twitter accounts. Sen. Tim Kaine (D-Va.) says the decision is “heartless.”

In the wake of the President’s heartless decision to end DACA, Congress must immediately pass the bipartisan DREAM Act to protect #DREAMers

The DREAM (Development, Relief and Education for Alien Minors) Act has been introduced several times in Congress in recent years. The current version was introduced in July by Sens. Dick Durbin (D-Ill.), Jeff Flake (R-Ariz.), Lindsey Graham (R-S.C.) and Chuck Schumer (D-N.Y.). It would institute a multi-phase process for qualifying alien minors (so-called “DREAMers”) in the United States that would first grant conditional residency and, upon meeting further qualifications, permanent residency.

Sen. Mark Warner (D-Va.), in his statement, said DACA is a “promise” that has allowed children of undocumented immigrants to “realize their full potential.”

This is a disgrace. Ending #DACA means going back on our word to nearly 800k #DREAMers who've known no other home than America. #DefendDACA pic.twitter.com/nEmpaMe8gM

In a statement released following Sessions’ remarks, President Donald Trump said DACA has “helped spur a humanitarian crisis — the massive surge of unaccompanied minors from Central America including, in some cases, young people who would become members of violent gangs throughout our country, such as MS-13.”

The decades-long failure of Washington, D.C. to enforce federal immigration law has had both predictable and tragic consequences: lower wages and higher unemployment for American workers, substantial burdens on local schools and hospitals, the illicit entry of dangerous drugs and criminal cartels, and many billions of dollars a year in costs paid for by U.S. taxpayers. Yet few in Washington expressed any compassion for the millions of Americans victimized by this unfair system. Before we ask what is fair to illegal immigrants, we must also ask what is fair to American families, students, taxpayers, and jobseekers.

END_OF_DOCUMENT_TOKEN_TO_BE_REPLACED 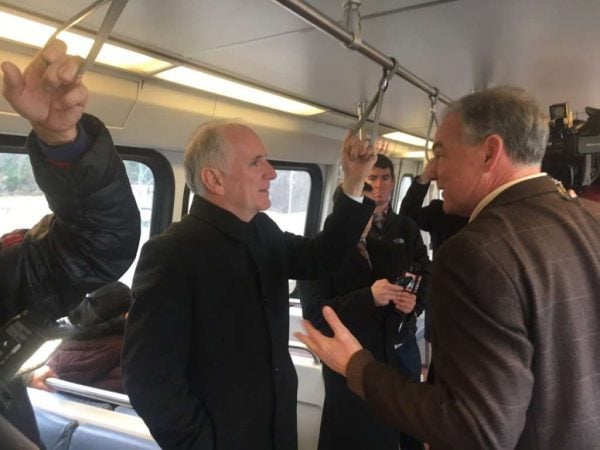 Sen. Tim Kaine (D-Va.) took a trip with Metro General Manager Paul Wiedefeld on the Silver Line today to check on the progress of its construction, WTOP reported.

The senator got on a train at Tysons Corner and rode it to the Wiehle-Reston East station. He then took a bus to Dulles International Airport, which is one of six future Silver Line stops.

“I’m very excited to see it,” Kaine said, according to WTOP. “It’s just a necessary project to keep up with the growth of Northern Virginia.”

When Hillary Clinton selected Virginia Sen. Tim Kaine as her Democratic Vice Presidential Candidate Thursday evening, it marked the first time since Woodrow Wilson that a Virginian is on the national ticket.

Virginia may be the mother of presidents — it’s had eight, more than any other state — just not in 100 years or so. And the last vice president from Virginia was John Tyler, who served for 30 days and then was vaulted to president upon the death of William Henry Harrison.

I’m thrilled to announce my running mate, @TimKaine, a man who’s devoted his life to fighting for others. -H pic.twitter.com/lTVyfztE5Z

Kaine, 58, has represented Virginia in the U.S Senate since 2012. Prior to that he served as Virginia governor (2006-10) and Mayor of Richmond. He has a law degree from Harvard and spent a year as a Catholic missionary in Honduras (where he learned to speak fluent Spanish). He is also a former Democratic National Committee Chairman.

Kaine’s early legal career was spent in Richmond, representing clients in fair housing and racial discrimination cases. His attention to civil rights is one factor that makes him “a Reston kind of guy,” says Virginia Del. Ken Plum (D-Reston).

Kaine has made many appearances in Reston in recent years. He sat next to Reston founder Bob Simon at Simon’s 100th birthday celebration in April of 2014. He praised Simon as a visionary in creating an integrated new town in a divided south.

“In 1964, when Reston opened, discrimination was rampant and legal,” Kaine said that day at Lake Anne Plaza. “It wasn’t until 1968 that the federal Fair Housing Act was passed. It wasn’t until 1971 that the Virginia General Assembly passed the South’s first fair housing law. Bob [Simon] was a real visionary.

“When we look at Virginia history since World War II, Bob should be one of the five or six individuals [we talk about]. Bob took a state that was facing backward and turned it facing forward.” 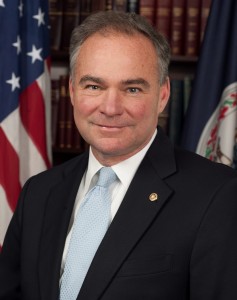 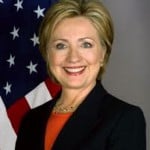 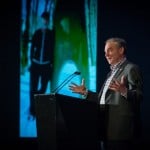 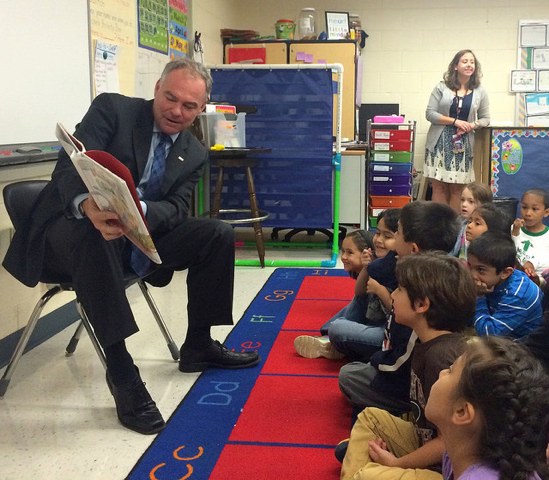 Kaine visited the school, which has a large Spanish-speaking population as well as a Spanish Immersion program, as part of Hispanic Heritage Month.

After the meeting, Kaine joined three classes — a first grade, a Spanish immersion, and a Head Start class — where he talked to students read to them in English and Spanish. Kaine is fluent in Spanish after spending time doing mission work in Honduras in the early 1980s.