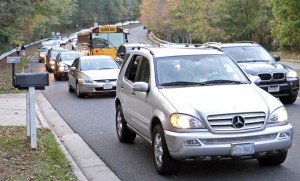 Stuck in traffic? Some major transportation improvements are on the way for Fairfax County in general and Reston in particular.

The Fairfax County Board of Supervisors on Tuesday approved a long priority list of more than 225 road, transit, trail and sidewalk projects that will receive funding from 2015-2020. The $4 billion in in the next six years, thanks to an unprecedented infusion of tax revenue dedicated to transportation.

The total estimated cost of the priority list is roughly $4 billion. The county expects to receive $1.4 billion through 2020 to get the work going.

The county said there are many additional sources of revenue to help fund the remaining projects. Among them: HB 2313 funds including Northern Virginia Transportation Authority local and regional funds ($902 million), and additional state aid ($376 million) for roadway construction and transit. Also included in this total are general obligation bonds and commercial and industrial property taxes for transportation that have not been previously allocated by the Board, the Board of Supervisors says. There is no impact to Fairfax County’s General Fund.

Good news for critics of changes to the Reston Master Plan, which will determine how density and development will happen close to Reston’s three upcoming Silver Line stations. Some studies have shown waits of up to five minutes at many traffic lights, giving the traffic a failing grade.

Several of the proposed projects will be aimed at helping alleviate that congestion.

Here are some of the planned Reston-area projects: