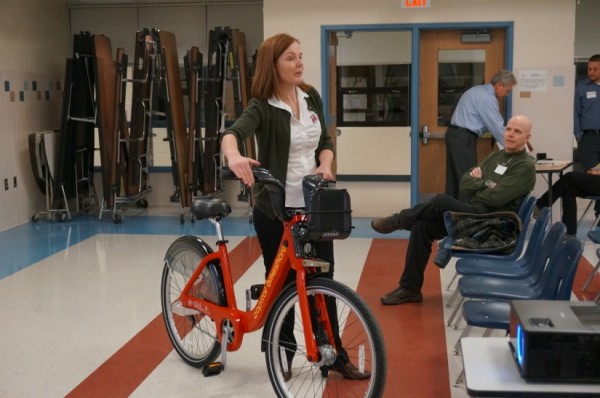 Could Reston become a transit-oriented community where residents and visitors use bikeshare as another arm of transportation?

That’s what Fairfax County transportation staffers and consultants from Alta Planning and Design are trying to determine. Fairfax County received a grant from Metropolitan Washington Council of Governments (MWCOG) Transportation/Land Use Connections (TLC) Technical Assistance Program to study the feasibility of a bikeshare here.

With one of three planned Metrorail Silver Line Stations set to open later this year, new transit-oriented construction planned and thousands of new workers and residents expected to relocate here, Reston seems like a natural fit for two-wheeled transportation.

Charlie Strunk, bicycle coordinator for Fairfax County, said his department has been thinking about a bikeshare in Fairfax since 2009.

“I get calls from Westfield, Chantily, asking when can we get a bikeshare,” Strunk told participants in a community meeting at Lake Anne Elementary on Wednesday. “The easy answer, probably not. Those places don’t have the density.”We picked Reston because we think Reston is the best choice. Tysons is a way off. Reston has fairly good density, mixed use, a mix of shopping, office and residential.”

Alta Planning + Design, organizers of Capital Bikeshare and others nationwide, is working on the study with the county. They are seeking input from the community to help determine where to put potential bikeshare stations.

They concentrated on a couple of main points on Wednesday:

* Bikeshare is not a recreational system; it is an extension of the transportation grid. Alta’s Fionnuala Quinn showed participants a Capital Bikeshare bike — a sturdy, three-speed bicycle with safety lights that flash when bicycle is in motion — and explained the difference.

“Bikeshare is a service that has bicycles as a component to getting around,” she said “There are many benefits — it adds critical links to the network. Reston about to undergo a real transformation to transportation network with the [Metro] Silver Line. Reston already has a lot of good features — a bus network, trails, park-and-ride lots. This would add a layer for short trips. It is fast, cheap and puts you out in the community.”

* The capital funding for other suburban-area bikeshares (Arlington, Montgomery County) came from a combination of  federal, state and local money, as well as developer proffers. Those networks are owned by the jurisdictions but operated by Alta Bikeshare, which oversees maintenance, rebalancing, and the warehouse, among other things. Operations are partially funded by user fees. Membership fees range from $7 an hour to $75 annually, with additional charges per use.

* County officials see the initial use as one where Silver Line commuters could disembark at Reston-Wiehle Avenue then hop on a bike to ride the additional distance (usually less than a mile) to their Reston workplace. In Rockville, where Capital Bikeshare opened in October, COG awarded Montgomery County a job access grant. The money helped create access to more jobs as employees could ride to the end of the red line, then use a  bike to get to biotech jobs a short distance away.

* Alta’s Charlie Denney says safety, topography and demand, as well as demographic data from the American Community Survey, will all be part of the study.

Audience members, many of whom were avid cyclists and bike commuters, had some questions about whether Restonians would use the system on a regular basis.

Among the concerns: Would this replace cars for short trips? Maybe, but there would have to be stations at the places riders were going (such as by grocery stores). Would there be outreach to the low-income community, who could embrace it bikeshare as an alternative to taking a bus? Capital bikeshare in DC is heavily used by tourists, yet Reston is not a tourist spot, so it may be of limited use.

Officials conducting the feasibility study want to hear from Restonians on two major points — where should stations be located and how would people use the system?

If you have feedback or suggestions about a bikeshare in Reston, contact [email protected].