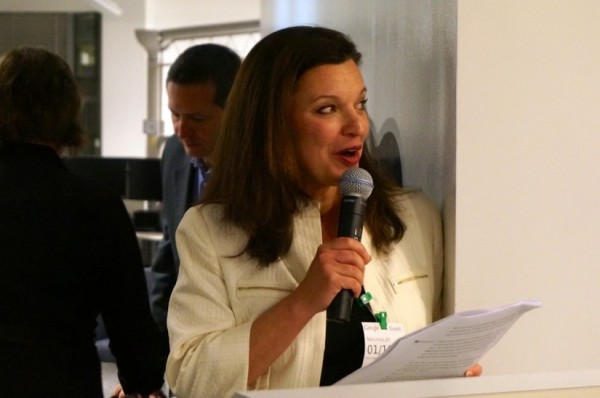 Cornerstones board member Jill Norcross has been named the non-profit’s chairman of the board, replacing Stuart Rakoff,  who died in January.

Rakoff had been named as Cornerstones’ (formerly Reston Interfaith) chairman in summer 2013, and served until his death on Jan. 6 from Amyotrophic Lateral Sclerosis.

Norcross, representing St. Timothy’s Episcopal Church of Herndon, joined the Board in 2006, and has served as the Secretary and most recently Vice Chair, as well as Treasurer of the Cornerstones Housing Corporation Board.

Cornerstones has helped some 250,000 area residents enduring tough economic times since its founding in 1970.

Norcross is the former Executive Director of HAND (Housing Association of Nonprofit Developers) and has had vast experience working in the affordable housing sector.

“I am honored to follow Stu as chair of Cornerstones,” said Norcross. “He was a truly remarkable man, everything he did in his life was based on his love and compassion for others.”

Rakoff was an early homeless advocate and volunteer at the Embry Rucker Community Shelter, and served on the Reston Interfaith (now Cornerstones) Board in the early years of the organization. He returned to the board as an at-large member in 2008, and quickly stepped into leadership roles, guiding a strategic plan focused on quality, affordable housing, strengthening wrap-around services and community building and engagement.

Rakoff understood the importance of measuring performance and worked with management to achieve an agency-wide evaluation program to assure the quality and impact of Cornerstones’ programs for working families, homeless, low-income and vulnerable neighbors, said Cornerstones CEO Kerrie Wilson.

Two new At-Large members will also be joining the Cornerstones Board of Directors — Katherine K. “Kate” Hanley and Tracey White.

Hanley, of Reston, served as the Secretary of the Commonwealth of Virginia from 2006-2010 under Governor Tim Kaine, and was Chairman of the Fairfax County Board of Supervisors from 1995-2003. She served previously as a county Supervisor for the Providence District from 1986-1995, and on the Fairfax County School Board from 1984-1986. She has also served a variety of non-profits.

White is the Vice President of Community and Government Relations at Hospital Corporation of America (HCA) in the Capital Division where she serves as primary liaison for HCA to community, corporate and civic entities in the Northern Virginia market. She was the president of the Greater Reston Chamber of Commerce and the Director of Corporate Relations at Children’s National Medical Center, among other positions. White was awarded Reston Citizen of the Year in 2000 and Virginia Chamber Executive of the Year in 2000.

“These extraordinary leaders bring deep knowledge of our region and keen insights on the role of housing and human services as an integral component of a thriving community,” says Norcross. “We are proud to have them join an already outstanding board of directors representing Cornerstones’ sponsoring religious organizations and community.”