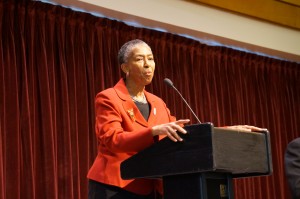 The Fairfax County Board of Supervisors voted 7-2 on Tuesday to adopt changes to the Reston Master Plan that will allow additional development and density for parts of the community as Reston moves toward becoming a transit oriented development with the opening of Metro’s Silver Line.

The vote caps a more than four-year process in which the Reston Master Plan Special Study group made multiple changes to the comprehensive plan in an effort to guide development while leaving Reston’s character in place.

The plan allows for a business/residential ratio of 50/50 within a quarter-mile of the Metro stations. The area from one-quarter to one-half mile would be slightly lower density and 75 percent residential.

The areas beyond a half-mile from transit would be largely unchanged, though they will be addressed by the task force in the future

She cited the original 1962 Reston Master Plan, saying “The plan states that in the year 2000, ‘new towns’ would represent optimum growth for the region. ‘New Towns’ will allow for preservation of open space and concentrated development. This, the birth of Reston. Robert E. Simon planned Reston more than 50 years ago with schools in walking distance, woods rather than lawn, and rapid transit into D.C., which we will have soon. The 2014 master plan is rooted in the original master plan. The task force has reaffirmed Robert Simon’s seven principles. This will shepherd the plan into 2050.”

Two supervisors were not as enthusiastic as Hudgins.

Springfield Supervisor Pat Herrity said he was voting no on the plan “not because I don’t believe in new development. I think we are heading down the same path we are with Tysons Corner.”

Herrity said that is not nearly enough money to fund the many transportation improvements needed in the areas around the Silver Line stations planned for Wiehle-Reston East, Reston Parkway and Herndon-Monroe, as well as Reston in general (such as additional crossings of the Dulles Toll Road). The first station, Wiehle-Reston East, should open this spring or summer. The others will follow several years later.

“I fear we are looking at another tax district for unfunded trans requirements. When you combine that with the growth in tolls on the toll road, I am not sure this is in the best interest of the residents of Reston.”

Sully Supervisor Michael Frey said he is concerned about people who do not live in Reston but have to get there to work every day.

“If Reston were an island, I think the [Master Plan] task force did a wonderful job,” he said. “But that won’t be the case – today or 20 years form now. So the question becomes how do people get to Reston? West Ox Road? Centreville Road? ”

“While it may be a good plan for Reston, [Reston] isn’t an island,” he added. “It exists and has to co-exist as part of western Fairfax County and Northern Virginia. If we took some more time and looked at it in a bigger context, I would support it. Without it, I think it is incomplete. ”

Hudgins said the plan as adopted addressed many concerns voiced to the supervisors by citizens at a recent public hearing.

Transportation — The supervisors last month approved a $4 billion plan that includes many high-priority projects for Reston. Among the projects are two four-lane crossings of the Dulles Toll Road.

Open Space — Hudgins said there will opportunities for new and continuing open space, as well as developer contributions for bonus density that will enhance opportunities.

Community Association — the plan encourages developers to continue the tradition of new housing being part of the Reston Association.

The board also voted unanimously to adopt several recommendations from the Fairfax County Planning Commission, which unanimously recommended the amendments for approval in January.