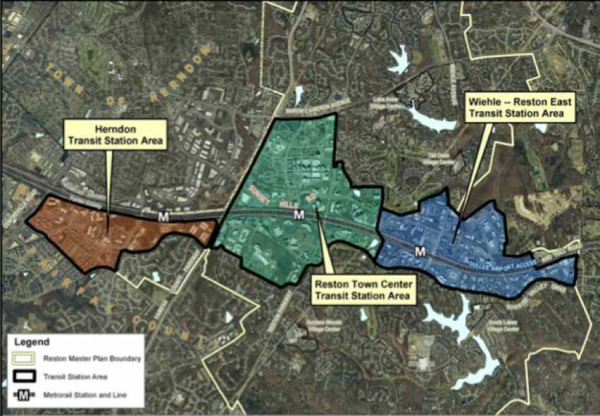 When the Fairfax County Board of Supervisors approved changes to the Reston Master Plan on Tuesday, it paved the way for big changes coming to Reston over the next decades.

Most of the added density will be within one-quarter mile of the planned Metro stations at Wiehle-Reston East, Reston Parkway and Herndon-Monroe. The area from one-quarter to one-half mile would be slightly lower density and 75 percent residential.

Will Reston turn into an important business hub? A city-sized canyon of tall buildings? A center of traffic jams? Or pretty much just be like it has always been? We asked some of Reston’s business and civic leaders.

From a business perspective, we are thrilled with the plan. No plan is perfect, but this certainly provides a framework so we can grow. I say if you are not growing, you are dying. This is a plan for what the next 50 years will look like. The key is flexibility — things are are going to morph a little. If we are flexible, this should be a good plan going  forward.

Ingrao said the Chamber  is organizing with other community leaders on a “Destination Reston” campaign to attract not just people who want to work, live and play in Reston, but also to promote Reston as a destination for visitors.

Pat Herrity, Springfield Supervisor who voted against the plan changes:

I voted against the plan because, yet again, I believe the plan ignores our priorities when it comes to where developer contributions are spent. Not too dissimilar to the Tysons plan, this plan results in over $700 million in transportation needs that come with the increased density. It is my fear that just as we did in Tysons, these requirements will be funded by a new tax on the residents and businesses in Reston.  This is something that could have been avoided if we had focused more of our developer contributions on transportation.

As the Reston Association Board of Directors and staff have been actively advocating for the Reston community throughout the comprehensive plan process, we were pleased with both the outcome of the vote and the comments made by Supervisor Hudgins yesterday.

Through our continued efforts to address our key areas of interest: transportation infrastructure, open space improvements and additions, community association membership, urban standards and design review;  changes to the plan were made and our voice was heard.  We believe the collaborative process has enabled RA to share our concerns and ideas and we will continue to promote the needs of current and future members of the Reston Association.

The approval of the revised plan isn’t the end of the road.  We’re going to keep pushing for an implementation process that includes a strong voice for Reston’s citizens.  As I’ve said before, implementation is where the vision becomes reality.  When the redevelopment proposals start coming through, Reston’s citizens need a seat at the table to make sure that the new growth is consistent with our principles and that we’re providing the infrastructure needed to support it.

For me, the best thing to come out of this process was the collaboration between Reston Citizens Association, Reston Association, and the Alliance of Reston Clusters and Homeowners.

Our civic organizations worked together for the good of the community, which is what we should be doing.  The plan is better for our efforts, and the tremendous turnout at our joint community forum on the Master Plan shows that the citizens appreciate what we did.

It will not only be nearly impossible for people beyond Reston to get to the toll road here, it will likewise be nearly impossible for most Restonians to reach the toll road, get to the Silver Line stations, or even cross our community because of the massive traffic gridlock along the corridor.  Even the County transportation staff expects this gridlock at the key intersections near the Dulles Corridor based on detailed engineering analyses.  They say drivers can expect multi-minute delays at each key intersection during peak morning and afternoon commuting periods. And Supervisor Herrity is right on the money, quite literally, when questioning how we are going to pay for all the infrastructure this urban transition will require.

Despite Supervisor Hudgins’ stated rejection of a new Reston tax, that will almost certainly be the ultimate outcome for Reston.  The only serious question is who in Reston will pay it.  Will the developers who stand to make huge profits from increased density step up to take the burden?  Will everyone in the urbanizing areas–businesses and residents alike–be forced to pay an added property tax as has occurred in Tysons?

Or will all of Reston get another special tax district added to our property taxes to fund the needed improvements in infrastructure?  We have no idea and the County is not saying if it has an idea, and that is what makes the passage of this plan especially troubling.

END_OF_DOCUMENT_TOKEN_TO_BE_REPLACED

More Stories
Del. Ken Plum: Leave It To The FedsFCPS: No School Thursday Due to Snow Forecast