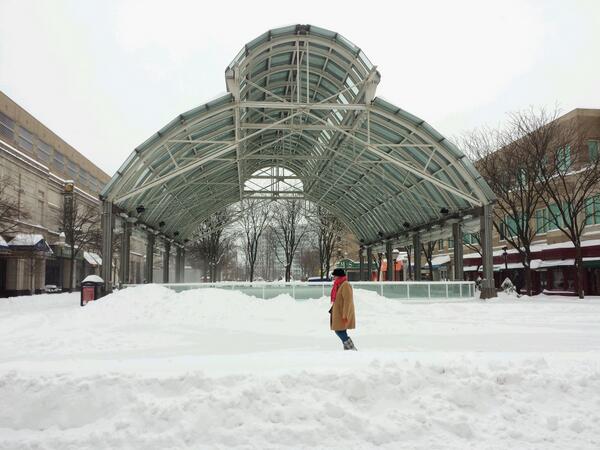 Even though a few flakes to a few inches are predicted to fall Thursday evening, most of the precipitation in Reston turned to intermittent sleet and cold rain throughout the day.

Fairfax County Public Schools  announced at 4 p.m. there would be an additional snow day on Friday as residents continued to dig out.

So how bad was it? National Weather Service trained spotters (and a few unofficial residents with rulers) put the snowfall at about 13.5 inches, give or take a little drifting.

That makes the Wednesday night-Thursday night storm pretty bad, but not the worst one-day total we have seen around here.  It was, however, the most that fell in one day since Dec. 19, 2009, when 15 inches fell at Dulles. The “Snowmaggedeon” storm of February 2010 dumped 32 inches at Dulles, but that was over a three-day period.

The 13.5 inches ranks this storm No. 6 in one-day totals as measured at Dulles.

An additional one-to-three inches of snow may fall Thursday night. The Winter Storm Warning remains in effect until 1 a.m. Friday.

Many people heeded officials’ warnings to stay off the roads, but some ventured out. Virginia State Police reported 78 traffic crashes, 172 disabled vehicles and 510 calls for service through noon on Thursday.

There was one death reported, when a Virginia Department of Transportation contractor was hit by another truck in Ashburn.

Others just had fun. There were dogs playing, snowmen sprouting — and this guy “waterskiing” down Ridge Heights Road.

Many Reston businesses were closed Thursday as crews still had not plowed some streets. Want to know when your street might be plowed? Visit www.vdotplows.org.

FCPS has already used seven snow days, and Friday will be the eighth. Makeup days will be held Feb. 17 and April 7. According to the school calendar, the school year may be extended a day to June 23 in exchange for today’s snow day, though FCPS has not made an official announcement. Friday’s snow day may not need to be made up.

Check out a gallery of great Reston snow photos here.