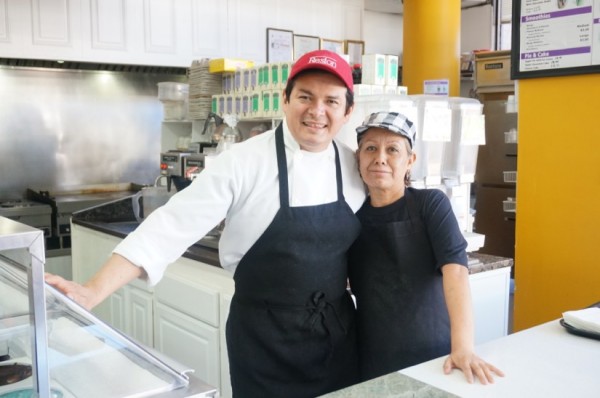 Alfredo and Rocio Melendez will flip the last burger and scoop the last ice cream cone at Cafe Lakeside on Wednesday.

The couple is closing up their lunch counter located inside Lakeside Pharmacy. The pharmacy, the longest continuously operating store at Reston’s historic Lake Anne Plaza, is under contract and will likely close this spring.

Alfredo Melendez said with the last day of the pharmacy unknown, he didn’t want to operate without a plan.

“We’re going to unwind and relax and generate new energy,” he said.

The Melenedezes were relaxing before they opened Cafe Lakeside in 2011. The lunch counter has been owned and operated by various people under various names throughout the years.

The couple has owned and operated the lunch counter at the pharmacy three times since 1990, Alfredo says. They also formerly owned the Lake Anne Coffee House across the plaza. The Melendezes were retired three years ago when the pharmacy food space became available again.

Ready to make a go of it again, they moved back into the space serving breakfast and lunch. Cafe Lakeside is particularly popular with residents on the plaza and visitors to the Saturday farmers market and craft market, many of whom take their orders to the outside tables on the plaza.

Alfredo says he has not ruled out opening another diner in Reston. He also said he hopes the buyers of the pharmacy keep the vintage counter and stools as part of a bar or restaurant.

Real estate sources say the prospective owner is an investor who plans to lease out the space, so future plans are still unknown.

Lakeside Pharmacy pharmacist and owner Larry Cohn has had the property on and off the market several times in the last few years as he eyed retirement.