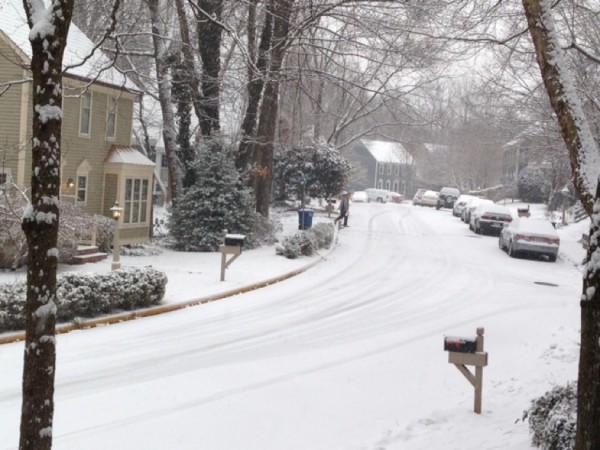 Update, 11:12 a.m., Wednesday: Fairfax County Public Schools have issued a statement on why no delay or closing, even though snow was falling hard this morning:

“Each decision is based on the best information available at the time. All of the school divisions in the DC area opened at their regular time this morning. It was our belief that – based on the forecast and the timing of the snow – we could proceed with opening of our schools at the regular time. If we had delayed the opening of school, it would have put us into the heavier snow showers that were initially forecasted. We’ve had a few bus delays but no serious problems.”

Original story: The 1 to 3 inches of snow predicted to fall overnight delivered, with Reston residents waking up Wednesday to snow-covered trees and slick roads.

Fairfax County Public Schools, which have already had seven snow days and several delayed starts this winter, opened on time, making it slow going for buses and cars.

The federal government announced the option of unscheduled leave for workers.

How was your ride to work or school? Tell us in the comments.