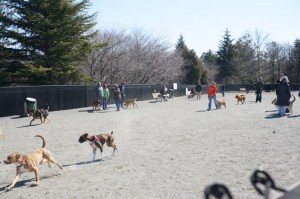 Baron Cameron Park, the 68-acre parcel owned by the Fairfax County Park Authority, could have a very different look in the future.

The park is home to 10 athletic fields, a playground, community garden plots and Reston’s only off-leash dog area.

The park is undergoing a master plan revision process, which could bring many more amenities  —  and, some say traffic and noise.

Among the proposed changes:

Other possibilities include replacing athletic fields with an indoor recreation center and additional parking and relocating the existing dog park to a central location within the park.

Residents are invited to hear more about the proposed changes and offer feedback at a meeting Thursday at 7 p.m. at Buzz Aldrin Elementary School.

The park master plan was last amended in 2001, and Park Authority Chair Bill Bouie says the park is long overdue for an upgrade. Baron Cameron is a district park , he said when the planning process kicked off nearly a year ago. That means it should have top-flight facilities to attract people from all over the western part of Fairfax County, not just Reston.

“A district park serves those in communities of Reston, Herndon, Vienna, Great Falls and surrounding areas,” he said. “All of those folks use the park, and we will be soliciting their input. We must consider future investments to transform it so it better serves Reston and surrounding communities.”

Several proposed additions have been met with mixed opinions since the planning process began in 2013.

The recreation center, which would feature a 50-meter indoor pool, would be built in partnership with Reston Community Center. It has the support of many swimmers. But a large number of people are opposed to building the estimated $30 million facility because residents of Small Tax District 5 would be left paying for a center used by non-residents. Others are opposed to the center because of predicted noise and traffic.

The dog park is a popular spot for dog owners in Reston. But a group of neighbors recently filed an injunction against Reston Dogs, the group that runs the park, and the FCPA. The five families say they are subject to excessive noise from the dog park and want the dog area closed.

There has been no resolution to the injunction, filed earlier this month. The defendants have 21 days to answer the complaint, Bouie said.