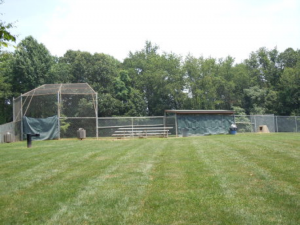 When a Reston Little League Class AAA game gets underway at Brown’s Chapel Field on Friday, it will usher in a new era at the Reston Association park.

After years of discussion, lights have finally been installed at Brown’s Chapel Field No. 1.

The Reston Association Design Review Board approved the installation of lights last June.

Like many changes in Reston, it was not a quick and easy process to get night baseball at Brown’s Chapel.

While the field improvements were initially approved and money ($282,000) allocated in the 2012-13 RA budget, there was concern by nearby residents that the lights and after-dark noise would interfere with the peaceful surroundings.

Still, the plan was OKed  and six, 60-foot light poles were installed. Each with three 1500W fixtures.

Plans for lighting at two additional Brown’s Chapel fields have been postponed, as have lights for the parking lot lights and concession stand.