The sounds of construction equipment are as common as the noise of schoolchildren as Reston’s Terraset Elementary School is in the midst of a major renovation and expansion.

When the work is complete, the school will have more than 100,000 square feet of new offices, art and music rooms, classrooms and parking areas. The new Terraset will expand from a capacity of 600 students to around 900.

Going away will be the dual pedestrian bridges over the courtyard that were part of the innovative design of the school when it was constructed in the 1970s. The school itself will remain mostly built into the landscape, something that earned it national attention when it opened in 1977. 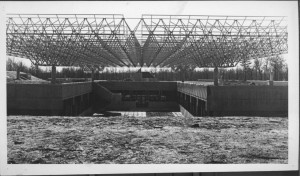 Terraset, translated means “built into the earth,” and coming out of the 1970s energy crisis, the school was touted as the first school on the East Coast to use solar panels as an energy source. In the school’s early years, the solar panels stretched across the entry courtyard.

The Fairfax County School Board designed Terraset as an experiment in moving away from oil dependency at its schools. FCPS applied for a $625,000 grant from the National Science Foundation to pay for the panels, but it was turned down.

The county then found another money source for the project: Fahd bin Abdul Aziz Al Saud, the former king of Saudi Arabia.

“I remember various times when there would be tour groups walking around the school, peeking into the wall openings,” said Susan Sather, a Reston resident who was a student at Terraset in 1977.

“Usually the groups were reporters, but at least a couple of times it was the Saudis in full length white robes with head coverings [but exposed faces].  I only remember Saudi men. I know the opening was covered by all the DC news channels, and everyone was watching that evening to see ourselves.”

But, alas, the panels were built for Saudi Arabia’s hot climate, not Virginia’s fluctuating temperatures. The energy savings were negated by repair costs and safety issues. Ice that formed on the panels in winter made several fall, and that was a safety hazard for children. The panels were removed in the late 1980s.

However, Terraset’s commitment to the earth remains. While the addition will provide a more traditional classroom structure for the building, the main part will remain underground. Children have always played on the “roof” of the school, which is a grass-covered field. Nearby is the school’s butterfly garden and an outdoor learning area.