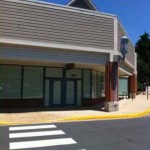 Glory Days Grill will soon begin construction at 1400 North Point Village Center, including adding a one-story addition to the space.

According to Fairfax County permits, the company has the go-ahead to bump out the corner storefront that used to house Blockbuster Video. The plans have also been approved by Reston Association’s Design Review Board.

The space has been empty since Blockbuster closed in March of 2011.

Glory Days announced last October that it would open the North Point location, and a spokeswoman said then it likely would not open until at least summer 2014. The company is just now getting started on permitting and construction. The Glory Days website says the Reston location will open in 2014.

Glory Days is a regional chain of sports-themed restaurants. There are 22 locations, including one at Fox Mill Shopping Center in Herndon.