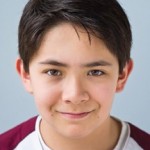 Canetti was bounced in the fifth of six rounds on the word parseval (a nongrid airship usually having a car suspended beneath a gas envelope).

Canetti, 12, was making his third consecutive appearance in the bee. He won the Fairfax County competition earlier this spring to become one of 14 Virginia contestants in the 2014 national bee at National Harbor. Twelve spellers advanced to Thursday night’s finals.