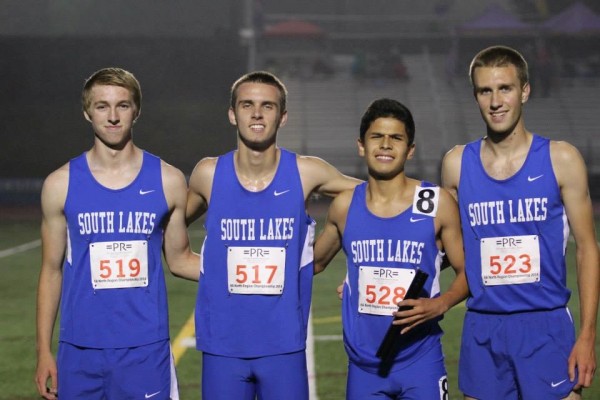 Twenty-five athletes from the South Lakes High School track team will compete in the 6A State Outdoor Track and Field Championship June 6-7 in Newport News, Va.

The girls team will be paced by senior Danielle Hale, who won the region title in the long jump and will be competing in that event as well as the triple jump and 4×100 meter relay. Senior Grace Gillen, juniors Claire Nieusma, Delaney Wickman and sophomore Golden Kumi-Darfour ran a season best 3:54.35 en route to the 4×400 meter relay region title at the 6A North Regional meet at Robinson Secondary School May 29-30. That relay team is ranked third in the state going into the state championships and helped SLHS to finish fourth out of 26 schools at the region meet.

Senior Khayri Denny, the Region champion in the long jump, will compete in that event as well as the 100 meters, 200 meters and 4×100 meter relay. As with the girls’ team, both the 4×400 (seniors Michael Kerr, Luis Rivas, Daniel Johnsen, junior Sam Arpee) and 4×800 (Kerr, Rivas, junior Andrew McCool, sophomore  John LeBerre) meter relay teams will compete at the state competition.

Kerr and Rivas will also compete in the 800 meters.  Johnsen will also run the 400 meters. Eric Kirlew finished fourth at the region meet in the triple jump and is the state’s top ranked sophomore in that event. Seniors Ben O’Connor and Anthony Mayo will team with Denny and junior Brandon Terry or sophomore Skander Ballard on the 4×100. 

Photo: SLHS boys 4×800 relay is headed to the state 6A meet/Credit: Ed Lull