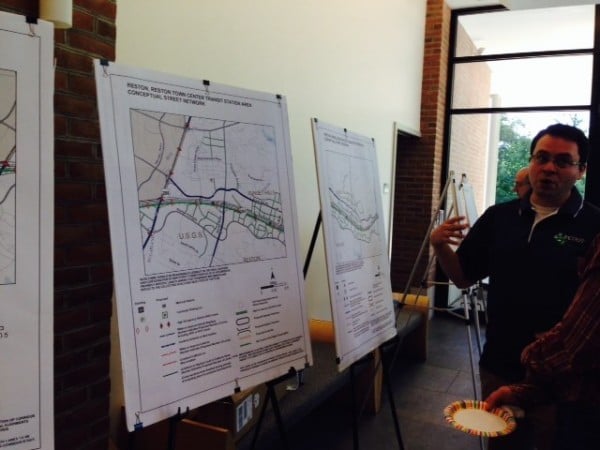 Reston residents and community leaders came to United Christian Parish on Saturday to see what Fairfax County planners may have in store for Reston as the community undertakes Phase II of the Reston Master Plan Special Study.

What they found: mostly information about the process, which will rely heavily on input from the people who live or own businesses here.

As Reston embarks on its second 50 years, there needs to be a plan in place for redevelopment, whether that happens next year or in 30 years, says Hunter Mill Supervisor Cathy Hudgins.

“Whether we develop today or in the future, we need to determine what the county’s role will be in that plan and what the plan should be,” she said. “Phase I changed the rules. Here, we are not changing the rules.”

Fairfax County officials say the the current comprehensive plan, last updated in 1989, requires revision because Reston no longer has a master developer to update the plan for Reston; the plan for Reston has outdated elements; and with population expected to grow with the arrival of Metro later this year, Reston is evolving as a community.

After four years of task force meetings, Phase I of the Reston Master Plan Special Study was approved by the Fairfax County Board of Supervisors earlier this year. Phase I maps out how development should proceed in the area surrounding Reston’s eventual three Silver Line Metro stations. Much of that area, particularly Wiehle-Reston East (scheduled to open this summer), previously had little residential development.

Phase II will mainly look at Reston’s village and convenience centers. It will also be done under Fairfax County’s new “Fairfax Forward” method of comprehensive plan review, which will rely on greater community engagement.

Reston founder Bob Simon, for one, says Reston could have fewer village centers. When Reston was planned in the early 1960s, supermarkets were about 15,000 square feet, he said. Today, they are more than 100,000 square feet.

“Since we were planning for 80,000 people, we planned for seven village centers and one town center,” said Simon. “We don’t need all of them. But I do think each village center should have a plaza.”

Phase I was organized around a task force made up of developers, community leaders and other stakeholders. Phase II will instead rely on residents and business owners to determine “what isn’t working,” said Hudgins.

She pointed out aging Tall Oaks Village Center, which has had a dearth of of tenants for years.

“Tall Oaks doesn’t work,” she said. “So we need to discuss ‘does it need to be what [the comprehensive plan] says it does?’ ”

County officials said Reston “will not be planned from a blank slate,” according to handouts at Saturday’s open house. “The general approach will be the preserve existing development, with the exception of the village centers.”

An online submission period for land use proposals is open now through July 11. Online submission for  community comments is also now open and will remain open until the Board of Supervisors hearing expected next spring.

September 2014 — County will formulate “strawman” proposals on neighborhoods and village centers and present to residents in community meetings.

June 2015 — Board of Supervisors Public Hearing.