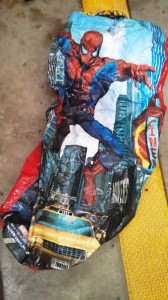 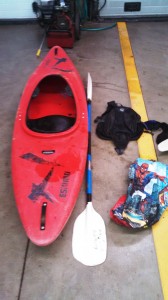 A kayaker who was thought to be missing on the Potomac River — sparking a three-day effort to search for him — was found alive and well at his home in Reston on Sunday, said Montgomery County (Md.) Police.

Police did not release the man’s name, but did say he had no idea that public safety crews were looking for him.

The man’s kayak and paddle were found in the river near Great Falls, Md., on Friday. He told police he had bailed out of the rain-swollen river and swam to shore.

Police said that about 1:45 p.m. on Friday, witnesses in the area of the Observation Deck at Great Falls near the Virginia shore reported “seeing a white male in a red kayak with a white paddle. It appeared that he may have needed assistance.”

Later on Friday, a kayaker down river located a red Kendo kayak and white paddle. The kayak was floating upside down near the Old Anglers Inn boat ramp on the Maryland side of the river.

Public safety responders from Montgomery and Fairfax counties, as well as the U.S. Park Police, started a search by air, ground and water later on Friday. Montgomery County police spokesman Pete Piringer said that 40 to 50 emergency responders participated in the search on Friday, and about a dozen searched on Saturday and on Sunday before the were notified police had contacted the kayaker.

The man was located after Piringer police showed the gear recovered from the river to local kayakers and posting signs in the hopes that someone would provide information about the missing man.

This is the second story in recent weeks involving a kayaker from Reston. Police said last week that Reston’s David Seafolk-Kopp, who told authorities he had been shot from the shore while kayaking in Anne Arundel County in April, likely made up that story and shot himself in the abdomen. When officers came to his Lake Shore Crest home on June 5 with a search warrant, Seafolk-Kopp shot himself again in the torso and jaw. He remains hospitalized in critical condition.