Every summer weekday morning, when dozens of children are dropped off for Reston Association Day Camp at Brown’s Chapel Park, they play among the mature trees close to the chapel.

The trees are original to the plot of land that is now the park. The chapel, however, is not. 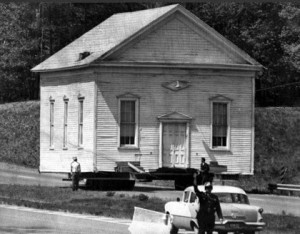 Browns Chapel was originally built in 1879, when Augustus and Sarah Brown deeded a half-acre of land on what is now Leesburg Pike to the “Methodist Episcopal Church.”

It remained in use as a chapel until 1967, when the congregation was dissolved. The Northern Virginia Methodist Board of Missions offered the structure to the Fairfax Historical Landmarks Preservation Commission for relocation. That organization in turn contacted Gulf-Reston, Inc., who were by then the developers of Reston.

In May 1968, Gulf-Reston opted to move the 70-ton chapel a few miles down the road to Baron Cameron near Lake Anne. The park, now part of Reston Association, grew around it. Today, it includes baseball fields, a basketball court, picnic facilities, a playground and other recreation amenities. On rainy days at RA Camps, the chapel is a refuge for indoor games.

Meanwhile, a cemetery owned by the church is still located at Baron Cameron and Route 7. More than 200 graves, some of them unmarked, remain. Some of the members were buried there as late as the 1980s — long after the chapel itself was gone.