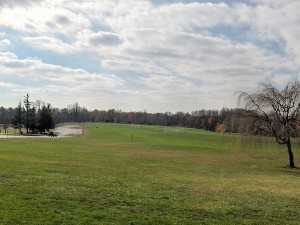 Baron Cameron Park may one day be home to a large indoor recreation center or other new amenity.

Or it may stay very much like it is, with garden plots, athletic fields and Reston’s only off-leash dog area.

Bill Bouie, Chairman of the Fairfax County Park Authority Board, says the approved master plan merely reserves the option to build there.

That doesn’t mean anything necessarily will be built at the 60-acre park.

“A rec center might not happen at all,” he said. “But before this, these was no approved plan in place. What this does is say ‘in Nirvana, when and if we get the money, this what it should look like.’ ”

The park authority board discussed the future plans for Baron Cameron Park for more than a year before voting on the plan. The goal was to update the master plan, which had not been done since 1990. The park has at various times been property of the Fairfax County Public Schools (which at one time was going to build a high school there), the Fairfax County Board of Supervisors, and finally, the Park Authority.

But with Reston population expected to grow with the opening of the Silver Line Metro this summer, the timing was appropriate to look at how Baron Cameron can serve more people in the region. Baron Cameron is designated as a district park, meaning it should have a variety of uses in order to serve a wide variety of needs, said Bouie.

Over the last 18 months, the Reston Community Center has held a series of community meetings and conducted a feasibility study on teaming with the parks authority to build the a 50-meter indoor pool and rec center at Baron Cameron. RCC would build the center on land donated by the park authority.

In 2013, RCC hired consultants Brailsford & Dunlavy for a feasibility study that estimated the rec center with pool would cost about $35 million.

The swimming community is in favor of a new pool as RCC’s 25-meter indoor pool is outdated and crowded, they said. However, many community members question traffic, loss of green space, financial impact and whether there is a need for an additional indoor pool in Reston.

Bouie says what may eventually wind up at Baron Cameron may not even be a pool.

Plans or no plans, the question of money remains. For the park authority to make improvements, it will need at least bond money — and preferably some developer proffer cash as well, says Bouie.

There are no park bonds scheduled to go before voters until 2016, and it may take as long as 2023, Bouie said. The cost for park improvements in the master plan (excluding the indoor center) would be about $25 million, he added.

“The improvements at Baron Cameron Park will not result in a tax increase to any residents of Reston unless it is part of an overall tax increase across the county,” said Bouie.

Meanwhile, RCC would need to hold a referendum among Small Tax District 5 voters for the $30 million cost of the pool and rec center construction. A referendum won’t happen in 2014, RCC executive director Leila Gordon said.

Some RCC pool opponents say Small Tax District 5 residents, who currently pay to support Reston Community Center, are taxed enough and should not be asked to pay for a new RCC.

“RCA/Reston 2020 has done exhaustive analyses of this issue, which totally refutes the idea that building such a facility is supported by facts or valid studies,” Tammi Petrine of Reston 2020 commented on an earlier Reston Now story on this issue. “In fact, local #5 taxes would go up to pay for an amenity that anyone in county can use.  … The cost of the referendum alone is $75,o00. I can think of better ways to spend (or save) my extra Real Estate Small Tax District 5 assessment than on a referendum that would enslave me and everyone else in Reston in perpetuity for a blood-sucking rec center that should’ve been built for us long ago by the Park Authority. ”