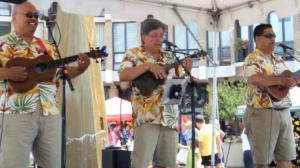 There are three special events in Reston this weekend that are mark-your-calendar worthy.

To see a full schedule of performances, see this previous Reston Now story.

Police Sports Extravaganza: With the 2015 World Police and Fire Games opening in Fairfax County in exactly a year, organizers want to give residents a sneak peak of some of the competition that will take place here.

There will be a Police & Fire Sports Extravaganza from noon to 6 p.m. Sunday at Reston Town Center.

Among the activities: live demonstrations of Honor Guard, Muster Carts, K9, Police Motors, Lawfit, Tug of War, Darts, Martial Arts and Sub Grappling; a Kids Zone;  and a touch-a-truck area where youngsters can explore a police cruiser and fire engine.

Reston Town Center will be a hub of activity for the 12,000 athletes and nearly as many spectators here next summer. Town Center will serve as the athletes village for nightly special events. There will also be several competitions in Reston, including the Open Water Swim in Lake Audubon.

Summer Film Festival: Lake Anne Plaza continues its outdoor summer film festival with a showing of “The Breakfast Club” on the plaza a dusk (about 8 p.m.).

Bring a lawn chair or blanket and your own popcorn — though plaza restaurants will be open and ready to serve.