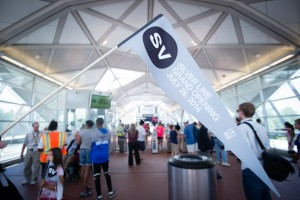 The red ribbon has been cut and Phase I of Metro’s long-awaited Silver Line is now open.

Residents can now look forward to the completion of Phase II, which will take them all the way to Dulles International Airport and into Loudoun County. The expected completion date is in 2018.

Here are some things to know about the next next 11-mile phase, which is expected to cost $2.9 billion.

1. There will be six stops.

The Reston Parkway station, located on the Dulles Toll Road, will be a few blocks from Reston Town Center. However, future planned development for the area between the station and the existing toll road will practically bring the gateway to the town center to meet the station.

When Metro’s Silver Line project received approval for $1.9 billion in federal Transportation Infrastructure Finance and Innovation Act (TIFIA) loans in May, it seemed as though Phase II’s money woes were solved and tolls would remain steady for the next five years. While Phase I received $900 million in federal funding, Phase 2 did not, which put the project in a precarious position the last several years.

The project has been approved for $1.9 billion in federal Transportation Infrastructure Finance and Innovation Act (TIFIA) loans, but the U.S. Department of Transportation recently notified all states that restrictions will be placed on their federal highway funds starting Aug. 1 because the Highway Trust Fund, which funds the TIFIA loans, is bordering on bankruptcy.

Capital Rail Constructors, a joint venture of Clark Construction Group and Kiewit Infrastructure South, are building Phase II. However, a year ago, the contractors predicting starting construction work in Spring 2014. That has not happened. Like Phase I, there will probably only be an “estimated” completion date for quite a while.

4. You will still need your walking shoes at Dulles.

There was a big battle three years ago about whether to make the airport stop an expensive underground tunnel or a more cost-effective above-ground station across the parking lot from the main terminal. The above-ground station won. Passengers will have to pass through a pedestrian tunnel with a moving sidewalk to get to the terminal. In the meantime, the Silver Line Express will carry airport-goers to Wiehle-Reston East to Dulles (and vice versa) for $5 trip.

5. You will be able to access the Reston Parkway station from both sides of the Dulles Toll Road. Here is what else is planned for Reston Parkway: Pedestrian bridge crossing; bus drop-off and Kiss-and-Ride at both entrances; 28 bicycle racks, 6 lockers on North side and 10 racks and five lockers on South side.