As Fairfax County planners begin to re-evaluate — and possibly re-imagine Reston’s village centers — they may look to what did and did not work with the original plans for the new town.

Reston founder Robert E. Simon envisioned Reston with seven European-style village centers where residents could gather, kids could play and shops could do business. In the mid-1960s, as America’s suburban car culture was building and strip malls and indoor malls were flourishing, Simon’s idea of a central plaza was unique.

And so in the mid-1960s, Lake Anne Village Center was born, followed by Hunters Woods Village Center in 1972. Later village centers in Reston followed a more traditional strip-mall footprint, but they may be rearranged in the future depending on the outcome of this latest comprehensive plan amendment. 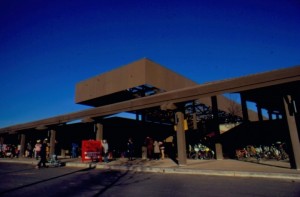 Simon, who at age 100 lives in Heron House overlooking Lake Anne Plaza, still believes that village centers should be the hallmark of Reston. He says that the Reston Master Plan Phase II is a crucial time for Reston’s future and he would like to see

“The village centers are my chief passion, of course,” says Simon. “The reason for the incredible reception (of Reston) when it was built was because of the plazas. I would like to see all the village centers look like Lake Anne, with plazas surrounded by density. Density IS coming to Lake Anne now.”

Simon is referring to Lake Anne Development Partners’ revitalization plan, chosen by the county in 2013, that will bring 60,000 square feet of new retail space, up to 82,500 square feet of office space, and 1,037 residential units near the plaza. The plaza itself will not be altered as it has a historic preservation designation. However, it is expected that the interior of the plaza will see a boost (and some cosmetic work) as more retail and residential is built around it.

The redevelopment is expected to get underway in mid-2015. It will take about 10 years to phase in all developments, Republic officials said.

Republic’s plan was selected by the county after years of studies, discussions and charrettes on ways to revitalize Lake Anne. Lake Anne was once home to a supermarket, a library, a child care center, a coffee house and other retail necessities. But though the lakefront setting was attractive, as the years went on, it proved difficult to get many Restonians out of their cars and running errands by foot.

It was a similar story at Hunters Woods, minus the lake views. The original Hunters Woods Village Center was designed “oriented towards people not automobiles,” according to an early marketing brochure. Some of the more stable tenants over the first 10 years: Drug Fair, Safeway and Baskin-Robbins. Others that came and went: Bangkok West, Big Daddy’s restaurant, La Gazelle, Ryder’s, Pizza Inn, the Seafood Emporium and the Alpenhaus Cafe. Fritzbe’s was a popular restaurant there for 14 years, from 1980 to 1994.

But it did not become the village gathering spot once envisioned. By 1979,  Martha Pennino, Reston’s rep on the Fairfax County Board of Supervisors, said the way the center was built was “simply not conducive to good business. People go to the liquor store and the Safeway, and then leave,” the Washington Post reported.

By 1997, the center had been sold several times and a new plan was submitted to the county. The plan called for tearing down the entire 114,000-square-foot center and building a new one in its place.