Twenty-two years ago, sleepy and suburban Lake Fairfax Park was the place to be — if you were a grunge fan in the mosh pit with other Rage Against the Machine, Pearl Jam and Red Hot Chili Peppers fans.

The Fairfax County Park Authority Park in Reston was the venue for two Lollapalooza festivals, in 1991 and 1992. That was back when many of the acts, their fans, and the music festival were young.

Nothing like that has since been held at the park, now home to The Water Mine Family Swimmin’ Hole, sports fields and a skate park, as well as bucolic scenery, trout fishing and lots of trees.

There is a reason for that, says Hal Strickland, who joined the board at the Sully District representative in late 1992 in the aftermath of the concerts.

Lollapalooza, founded by Jane’s Addiction’s Perry Farrell, went on hiatus for a while, but now has a permanent location in Chicago’s Grant Park. In its early years, the show traveled around the country, attracting up to 50,000 at some venues.

In Reston, the shows had estimated crowds of 25,000, and many attendees were treated for heat-related illnesses. Tickets for the all-day shows were $32.50. 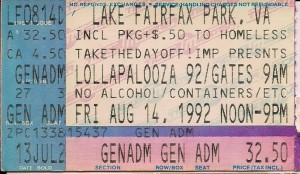 After the first HFStival — a smaller show sponsored by former alternative radio station WHFS — took place at Lake Fairfax in 1990, Strickland said the park authority was pitched by Lollapalooza organizers.

The park authority was was under the impression that the festival would be somewhat family friendly, said Strickland.

“We were somewhat befuddled over the conduct of the attendees, ” says Strickland. “There was quite a bit of alcohol. And weed. And drugs. At no time did the park sanction that kind of event.”

Nearby residents were not too pleased, either. Traffic jams went several miles down Route 7, Baron Cameron Avenue and other major arteries. One neighbor told the Washington Post she was “enraged” at the concert being held here.

“They went ballistic,” Strickland said of nearby Reston residents. “They called the park authority. They called the Supervisors. Police got involved. Traffic was backed up for miles. [Concertgoers] were wandering into backyards.

The Lake Fairfax shows remain among some of the best Lollapalooza moments in history, according to the Lollapalooza website. Among them:

It wasn’t a perfect day [at Lake Fairfax]. Hours into the festival, the heat had turned so bad that water was a necessity. The choices were slim, with vendors selling either watermelon slices or water bottles for $3-4. Some waited in long lines for a small paper cup of water or near the water cannons on the off chance that they would hit them-not the optimal conditions of today.

With Dave Abbruzzese on drums, the performance is already a rarity unto itself; however, there are other factors that turn this into something “unreal.” Fans toss mud onstage, a few make their way on (only to jump right back off), bassist Jeff Ament and guitarist Mike McCready spring off the monitors countless times, Eddie Vedder dives into the fans (and chucks his mic into the floor), guitarist Stone Gossard smashes his guitar to pieces, and Abbruzzese disassembles his kit with his legs. This is the band that solidified themselves as a must-see forever onward-and it happened at Lollapalooza.

By 1993, Lollapalooza was banned from Lake Fairfax. The noise complaints and traffic issues were just too much, said a park authority spokesman at the time.

“We used some poor judgment,” said Strickland. “We did not do our due diligence. The park authority is always looking for new revenue, but we have pretty much steered clear of this kind of thing ever since.”