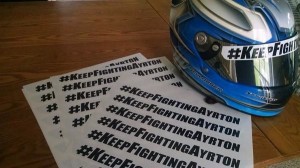 Climo was on a practice run at Le Monaco de Trois-Rivieres when he made contact with the hay bales ringing the track and was thrown from his cart.

Following an immediate surgery to relieve the pressure on his swelling brain from the impact, Climo was medically induced into a coma to allow the swelling of his brain to reduce. All of his vitals, bones and muscles are in good condition and the swelling in his brain is going down although as of Monday he still remains in the induced coma in critical but stable condition.

The Eastern Canadian Karting Championship and Coupe du Quebec were held last weekend in Trois-Riveres. Go-Karts can go up to 60 mph on that track.

Climo has been racing since he was 10 years old. He first tried it after watching Formula One races, he told the South Lakes Sentinel in 2010.

“You have to be able to think quickly,” he told the Sentinel. “The racing I do is left and right. I am not saying NASCAR is easy, but karting is hard. … You are literally an inch off the ground going really fast. It’s crazy.”

Racers and friends have started a #keepfightingAyrton Twitter hashtag to support the teenager.

More Stories
Throwback Thursday: When Lollapalooza Played RestonThank You To Our Sponsors and Advertisers