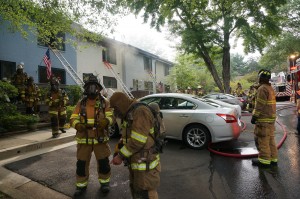 Fairfax County Fire and Rescue is investigating the source of a fire that caused $180,000 in damage to two townhouses on Golf Course Drive on Monday.

Firefighters responded to 2052 Golf Course Drive, an end-unit townhouse, at 4:15 p.m. on Monday.

Firefighters conducted an aggressive fire attack from both the exterior and interior and brought the fire under control in approximately 15 minutes.

A preliminary investigation showed the fire originated on the read outdoor deck of the home, officials said.  The adjacent home at 2050 Golf Course was also damaged, and other homes in the row of attached homes have some smoke damage as well, officials said.

Five occupants of the two homes have been displaced. They had already escaped unharmed by the time units were on the scene.

Firefighters rescued an adult cat from 2050 Golf Course. The cat was given oxygen at the scene and taken to his veterinarian’s office as a precaution. Another cat was missing at that home, and Schmidt said Tuesday he did not know if the second cat had been found.