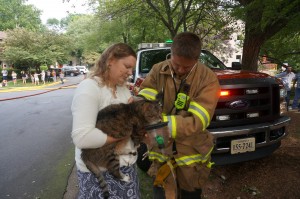 Update: Neighbors of the family at 2050 Golf Course Drive said the cat missing in Monday’s townhouse fire has been safely found.

Fairfax County Fire and Rescue firefighters rescued one cat from the fire, which broke out Monday afternoon at 2052 Golf Course Drive. The fire, which is still under investigation, caused $180,000 of damage to several townhouses.

The rescued cat was given oxygen at the scene and taken to an animal hospital while firefighters tried to locate the other one.

Firefighters said at the scene that cats are likely to go under furniture in a situation such as a fire. That helps them as there is more air low to the ground.

Neighbors said the missing cat has been reunited with his owners.

Photo: Firefighter examines Marcus, who was rescued from a fire on Golf Course Drive on Monday. His feline companion was located safely on Tuesday.