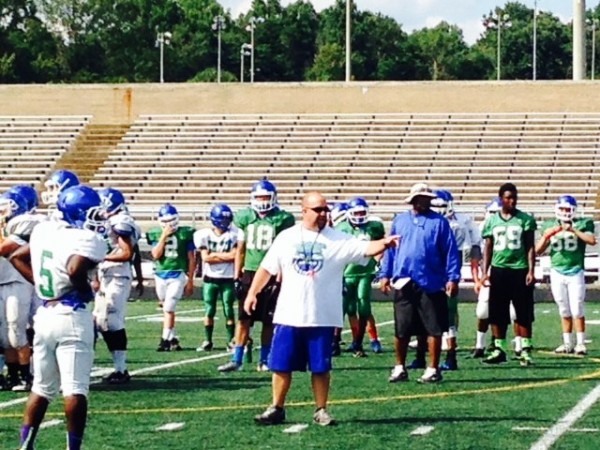 New South Lakes High School football coach Trey Taylor knows this will be a rebuilding year for the Seahawks.

Only four players with varsity experience return to the team. But with nearly 20 years as a coach, Taylor believes he can get South Lakes where it needs to be.

“We’re in a building stage,” he said Tuesday as the Seahawks practiced in preparation for Friday’s opener against Madison. “The team graduated 25 seniors. The good part is we are learning a new system and everyone is new. The bad part is, everyone is new.”

The Seahawks finished 5-6 in 2013, making a return to the playoffs, where they lost to eventual state champs Centreville.

Taylor is a former West Springfield and Frostburg State (Md.) player who has coached at a long list of Fairfax County Schools. Taylor was the defensive coordinator for South County last season. Prior to that, he spent two years as head coach at Robinson.

Taylor’s most successful run was five years at Woodson, going 31-23 and leading the team to the state semifinals in 2004 and the regional final in 2009.

Taylor says he sees potential in many South Lakes players, but there is some “ground to make up in the weight room.”

“Longterm, there is a very positive outlook here,” he said.

With the opener just days away, Taylor is still figuring out who should start at quarterback. Top candidates include senior Tavarius Lee, who mostly played defense but saw some time at quarterback in 2013, and former offensive tackle Matteo Rule.

South County, which averaged more that 40 points per game last year, used an up-tempo offense. Look for Taylor to incorporate that style into the Seahawks’ offensive plan.

Returning to Seahawks is Darius Hawkins, who will play both receiver and free safety.

“To be replacing nine [positions] on both sides of the ball a little unusual,” he said. “But we have some good kids coming up.”